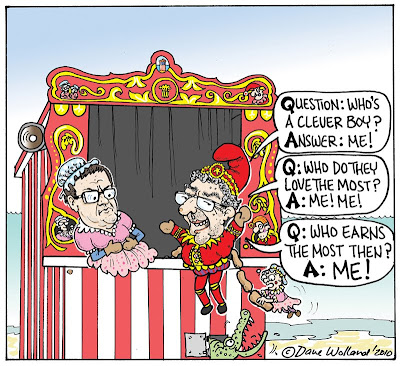 On Sunday mornings there are two competing current affairs programs to tempt your appetite, TV1’s “Q&A” and TV3’s “The Nation”. Somewhat surprisingly, there seems to be some cross dressing on both channels going on. The publicly owned TV1 appears to have taken a commercial approach and overseas owned TV3 has chosen the more focused and public service style that might be expected from TV1.

Q&A is fronted by the irrepressible Paul Holmes who carries on with his usual hyperactive flair that has made him famous in various roles on TV, commercial radio and satirical reviews. I first saw him acting while I was at Victoria University in the late nineteen sixties and if my memory serves me well he had an Afro hairdo like Jimmy Hendrix.

Even then I could see he was a superb actor – bright, quick witted and knew how to work an audience. Alas, I feel that his entertaining talents do not necessarily make him a good current affairs presenter dealing with serious issues.

Paul Holmes might argue that his style gives colour and energy to the show. Indeed it does, however I would enjoy it more if he used his obvious skills in a satirical show instead. We could certainly do with more programmes on TV starring him and other comedians before he retires (hopefully a long time from now).

TV3’s The Nation is quite another kettle of fish. Sean Plunket seems to take his role as presenter very seriously. He might not have the entertaining charisma of Paul Holmes, but he makes up for it in spades with a crisp delivery and penetrating questions. No doubt his background as a former Radio New Zealand interviewer helps a lot.

The layout of the show has a weekend paper feel about it with its arts and business section and fewer panelists. I also like the way the guests and Sean Plunket sit and chat in a more relaxed fashion than they do on Q&A. The conversations in The Nation seem to have more depth, whereas Paul Holmes rattles rapidly through a heap of topics with guests who stand uncomfortably at podiums like electioneering politicians.

In spite of being shown at an in convenient times, both shows are worth a look and fans of Paul Holmes will not be disappointed. If TV1 thinks that there would be no show without Punch worth looking at (Sundays at 9am) – they are wrong. ‘The Nation’ on TV3 is delivering the goods on Saturday at 11am and 8 am on Sundays.
Posted by Dave Wolland at 4:24 PM