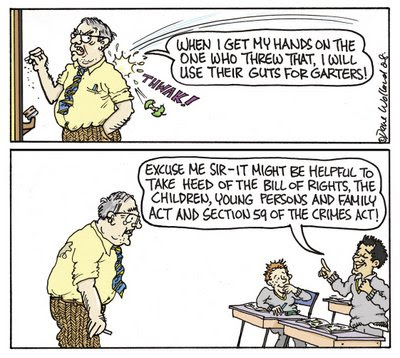 I can tell from my radio that the Election must be getting quite close now. Each day begins with a rising dawn chorus of cackling politicians trading accusations in the media and making calamitous predictions if they do not get into power.

The Polling Bird is here again too, pecking at our opinions and speculating on the likely roosting status next year in the Beehive. I had thoughts of doing a Winston Peters cartoon depicting him as a lion being clawed to pieces by other political lions. A nearby media vulture says to another, “Looks like ‘Shredded Evidence’ is on the menu this time.”

Instead, the successful pro- smacking referendum drew my attention, because I am surprised that New Zealand is beginning to shift away from the social reforms put into place by parliament over the last nine years. Three hundred and ten thousand Kiwis have asked us to vote on whether or not the amended section 59 of the Crimes Act (intended to reduce parental violence) should be repealed or not.

The Government has decided to delay the referendum until next year and I have mixed feelings about that. Issues like this one are usually treated as a conscience vote and it would have been useful to get candidates opinions on the matter. It certainly would be more interesting debating this than the hoary old chestnuts of law and order and welfare reforms.

I cannot remember smacking my daughters, but I do recall telling them I was getting very close to it at times. I know just how frustrating it feels when you seem to run out of options and try to draw the line on what kids can get away with.

I had a lot to do with teachers in those days and they told me how incredibly stressful it was grappling with added responsibilities and having less disciplinary options than parents did at that time. Many disruptive children had smacking parents and it took extra teaching time to get such children to respond to other disciplining techniques. Some never get the message of course, until they have spent years in jail.

Last year, I did some teacher aiding and I am sad to say that things have not changed much. A huge amount of time is lost settling classes down and dealing with administration. The NCEA is well intentioned and it would work better if every class had teacher aides and computers to spread the load. Our schools appear to me to be under resourced and our secondary schools in particular, could do with more parental interaction.

What I witnessed was a lot of under achieving students gliding along, buffeted by stressed teachers and education negative peer pressure. I found most of the students politely respectful and the easily distracted ones, made some progress when given some one to one attention.

I remember well behaving just the same at their age – especially in maths where the teachers seemed to speak only Latin or Greek. Luckily for me, I had encouragement at home to get teach-yourself books from the city and catch up in my spare time.

Teacher recruitment is more difficult than it used to be and a couple of surveys I read about might offer some explanations. In 1948, the major concerns of secondary teachers were: dealing with bad language, chewing gum and the dress code. Today, when asked the same question, teachers expressed fears of being accused of sexual abuse and being beaten or stabbed.

These results reminded me of a few tongue in cheek verses from a song, no doubt penned by a teacher who had reached the end of his tether.

“Beating boys is ineffective, every one’s a mother’s son.
Take the straps off all the teachers and give each one a loaded gun!”
Posted by Dave Wolland at 3:39 PM

Back in the 60's my fiance stopped a teacher caning him but he got chucked out of school for it! He was ahead of his time!

When I was teaching (also back in the 60s!) I refused to send the kids for caning (only men did the caning)- the sky did not fall and the kids and I got on well. The guy next door to my classroom was cane-happy and how they hated him! Not a great foundation for good relationships.

I also admit to having smacked my oldest kid at times - after a while I realised it wasn't working so stopped doing it.

The legislation is meant to remove a legal defence for child abuse - hopefully it will make some people stop and think before they whack.

You know I'm a Green supporter so we're proud to have got cross-party consensus on this bill with not a stick in sight.