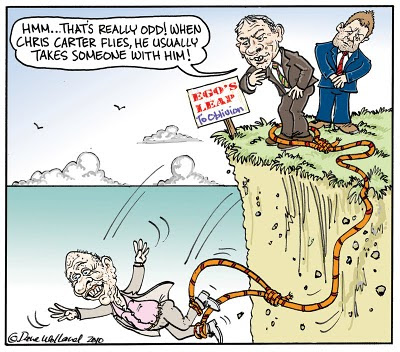 I doubt if there are many people in Parliament who would like to be Phil. Goff right now. His standing in the preferred prime minister polls is abysmal and he leads a party that is not getting enough public support to win the next election. Like Prince Charles, the prospects of getting the job that he probably thought he was born for, have been fading in the shadow of a powerful woman.

Most politicians and commentators seem to agree that Phil Goff is a decent, likeable and very competent man. His academic record and behaviour in public service positions are certainly praiseworthy, so why is he doing so badly in the polls?

I put it down to several vital factors that Kiwis do not seem to like in their leaders – persistent adherence to unpopular (or failed) ideologies and a lack depth in their personality and life experience.

Phil Goff appears to remain an unrepentant monetarist and my correspondence with him confirms this. I am sure that he was very influential in persuading Helen Clark’s Labour Government to keep some of the misguided economic reforms of the 1980’s intact. In my opinion, these policies have contributed to our current economic woes. Like Don Brash, he appears to think that there is nothing wrong with his ideas and the rest of us should understand how right he is.

John Key on the other hand, appears to be more pragmatic and I think most of us prefer our politicians that way. Phil Goff also appears to me to be more aloof and detached than Key – rather like the bureaucrats he works with every day. On camera, John Key comes across as relaxed and tunes in to the audience. Phil Goff’s approach is more defensive and guarded and (to put it mildly) not very inspiring.

When it came to choosing a replacement for Helen Clark, the Labour Party was obviously wedded to that seductive 1980’s siren called TINA – There Is No Alternative. Which is why Phil Goff got the job I suspect. Not everybody was pleased though, because we have just witnessed the extraordinary outbursts of Labour MP Chris Carter on TV stating the obvious. “Phil Goff is a very nice guy, but he is just not going to win (the election).”

Oddly enough, Chris Carter has probably done more to cement in Phil Goff’s leadership by his ridiculous anti-Goff note writing behaviour. Anyone raising the issue now, is bound to be labeled a follower of Carter.

It looks very likely then, that the next election will be game, set and match to John Key. The only wild card entry could be a resurgent Winston Peters backed by a rejuvenated New Zealand First Party. If National allows widespread foreign ownership of New Zealand land and businesses this year, resentment is bound to spread across the country. Phil Goff might not topple Key, but NZ First and the Greens just might get Labour within reach of the holy grail of power.
Posted by Dave Wolland at 9:44 PM

Don't let the facts get in the way of a good story will you? Remember Don Brash got within 2% of being elected Prime Minister after the National Party and its policies had been decimated (under Bill English) at the previous Election. So much for Brash's ideas being out of tune with the public. He performed one of the National Party's biggest comebacks that ultimately delivered John Key to power three years later. If Phil Goff can be even half as successful as Brash was at communicating his ideas to the public, he'll do far better than you predict at challenging Key in 2011 or in the Election to follow.

Basil,
Brash was rejected. A loss is still a loss. Key's popularity grew when he distanced himself from Brash and later Roger Douglas.
Alas, I think neither Key nor Goff will help turn this country around socially or re-balance our economy. Cunliffe looks promising and so I showed him politely waiting.