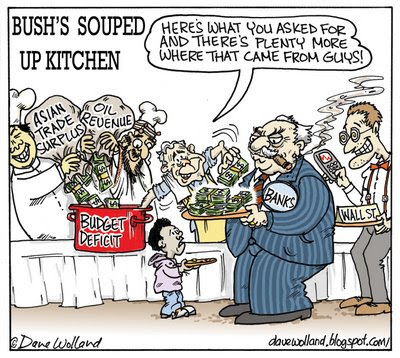 You might have noticed that he news is getting serious again, now that Winston Peters has ceased appearing in the headlines. The worried faces of world leaders say it all. The credit crisis can no longer be ignored and governments are trying to prevent us all from being splattered with deregulated banking effluent.

Are we really going to see the end of the golden weather of excessive consumption and have to brace ourselves for the chilly winds of austerity? When I think about that prospect, I can see many of us behaving like that desperate little character called Scrat in the animated film “Ice Age”.

Just like him, we might be forced to try and out run the avalanche of ice before it buries us and our precious acorns - (savings) in an icy tomb. I hope I will have more luck than he did!

The dreaded “D” word is being used more often these days and so I have been re-reading a book I bought from the discarded book pile at the library some time ago. It was written in the nineteen seventies by the economist W. Rosenberg, who gave it the title, “What every New Zealander should know about THE COMING DEPRESSION and how to overcome it.”

He predicted the economic meltdown we are experiencing and suggests that one of the ways out of it could be to implement the ideals of Democratic Socialism. This means that governments will need to nationalise failing businesses and increase worker participation in shareholding equity and management.

This scenario reminded me of a story about two landless peasants in Chile who are discussing the election victory of the new democratic socialist government led by Salvador Allende. Pedro says to Miguel, “Hey Miguel, my old friend. In a truly socialist country we will at last share the wealth of the land – is that right?” “Si, that is so Pedro.” Miguel replies. “Does that mean we will share all the land?” Asks Pedro. “Si Pedro, that is so,” says Miguel. Pedro continues on with, “All the cows and sheep?” “Si, Pedro.” “All the chickens?” Miguel pauses for a moment and then turns angrily to point an accusing finger at Pedro and says, “You know I have chickens! The only way you will get your thieving hands on them is over my dead body!”

In my lifetime, I have seen two economic theories fail. First to go was Communism and now we are experiencing the failure of Monetarism.

It seems to me that Communism was a great idea, but it ignored the need for most people to own things and control most of their own economic activities. It also lets tyrants get into power and exploit the people for their own advantage.

Monetarism also appears to be too idealistic, because it believes that people will make the right economic decisions if there is minimal regulation and the least amount of government interference in their lives. I think it is failing, because it allows some people to ruthlessly exploit the system to the point of social break down.

If governments followed monetarist principles, then in the present situation, the banks would be left to collapse and we might have to fall back to bartering as a way of exchanging goods and services.

Rosenberg published his book almost exactly thirty years ago, when we had much more government involvement in our local economy and we were more prosperous in comparison to other economies. If he was alive today, then I am sure he would suggest that we might have to restore that involvement to remain economically and socially stable.

However, as our banks are now mainly Australian owned I wonder if the next government will buy into them or bankroll their opportunist foreign lending by issuing bonds and government guarantees. Either way, Labour or National are hopefully going to employ an “ism” that works – pragmatism
Posted by Dave Wolland at 2:50 AM