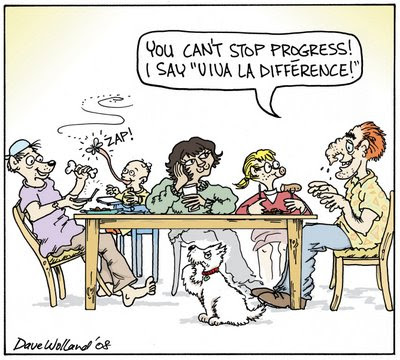 The only enjoyable thing about my regular visits to the dentist is the chance I get to read magazines I cannot usually afford to buy. He often has well thumbed copies of National Geographic, Time, North & South, Surfing magazines and of course The Woman’s Weekly which I furtively flick thru’ to catch up with celebrity gossip.

On one of my visits, I read an article on health there and along side of it was a photo showing vegetables grouped together in the shape of a human face. It was titled “You Are What You Eat”.

This picture took me took me back to my childhood when I remember looking at a very similar poster in “The Murder House” at my primary school. It looked very sinister at the time and I was (alas) not very impressed with the health message. After all, who in their right mind, would cut back on eating enjoyable junk food just to have legs like parsnips, a pumpkin face and Afro-style broccoli hair. I thought a far nicer composition would be made of pies, chippies, sweets, chocolate and fizzy drinks.

In those days, the dental health poster was a piece of imaginary promotion. However, recent advances in genetic in engineering (GE) are bringing us closer and closer to actually making it possible to change the appearance of every living thing (including ourselves). We are now able to tamper with the building blocks of life and a fierce debate is raging about how far we should go.

So far, New Zealand has resisted the temptation to use genetically modified seeds commercially, despite the fact that this practice has spread to most countries across the world. There are field trials being carried out here, but the decision to release the modified seeds has yet to made.

We should be safe then, from eating food that is contaminated with genetic combinations that are totally new to nature. Not so, because if you look a bit more closely at many familiar New Zealand brand named goods on the supermarket shelves, you will see in small print that they are no longer made here.

More and more of our food is being imported from countries like China where there are few controls over quality. Growers in New Zealand, on the other hand, have to contend with many more regulations and quality controls. These can make the goods pricey and so make the imported competition appear more attractive.

The Greens want to see packaged and fresh produce clearly labeled on all food produced by New Zealand companies or imported here direct. The Government has said no to this and to my mind, it shows how powerful the commercial sector lobby is. It is ok apparently, to be GE Free in principle but in practical terms we have all probably eaten GE food by now and our intake is likely to increase if international corporations continue to have their way. They know full well that GE content on labels would be a financial disaster for many food processors.

Obviously, I am no fan of GE and I am pleased to live in an area where the Mayor feels the same and intends to discourage any commercial GE activity in our local agriculture.

If GE crops do eventually creep in, what will be the consequences when this new technology is all around us? I foresee an initial boost in productivity and then a very complicated ecological reaction that will cost a great deal of money to sort out when it goes wrong.

DNA testing for the police is already becoming a routine activity and I wonder how they are going to cope when forensic analysis suggests that they look for a suspect with – ‘’fishy eyes, toad like posture, and a tomato complexion”. Mind you, I can think of some locals who already fit that description. I wonder what they eat?
Posted by Dave Wolland at 7:40 PM