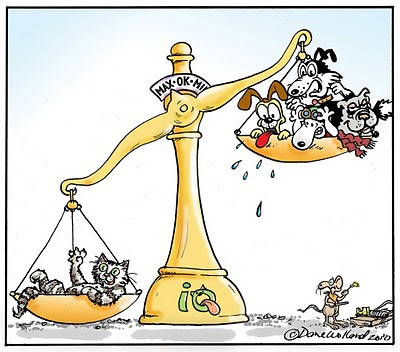 I don’t believe a word of it! I have just shredded a newspaper article that has the audacity to suggest that dogs are smarter than cats. Oxford University researchers in Britain are claiming to have evidence that social animals (like primates, dogs and dolphins) have evolved bigger and more intelligent brains than solitary animals (like cats).

Just because dogs like doing tests, does not make them more intelligent in my view. If they are so smart, how come cats like me out number them at least ten to one. In evolutionary terms, we are doing far better and we did not achieve that by fetching sticks and chasing imprisoned animals on farms all day.

I mean, just look at them. Dogs do not have hygienic toilet habits and God only knows why they have such a highly developed sense of smell. Even a cat like myself, with my small and beautifully streamlined nose, can smell them miles away. To put it bluntly, most of them stink.

I will admit though, that dogs are more like people and that is not a compliment. They have been with them much longer than cats and allowed themselves to be bred into a wide variety of freaks. Most of them would starve in the wild and that is an evolutionary mistake. If people destroy themselves, those dogs will go too.

We cats on the other hand, know that it is better to hedge your bets and keep your independence. We prefer to be lodgers and not slaves. At night we go hunting for snacks and during the day we amuse ourselves by manipulating humans. It very true when they say that dogs have masters and cats have staff.

I will have to admit though that cats have smaller brains than the average dog, but our brains are in fact larger in proportion to our body size. We also have a more highly developed cortex. This area of the brain is involved in thinking and cats do a lot of that.

Another observation worth making is that dogs eyes are wider apart than cats and humans - almost on each side of their faces. No wonder they are so easily distracted. In my opinion, they could all do with a regular dose of Ritalin to help them overcome their inherent hyperactive tendencies.

As a parting comment, I cannot resist commenting on the appalling lack of vocal range that dogs have. All they can manage is coarse barking, pitiful howling and salivery slurps. We cats, on the other hand, are more musically accomplished. There are few things as nice as serenading the moon with a heavenly chorus. People even throw us gifts of appreciation like: clocks, ornaments and air gun pellets.

I suppose all animals have pluses and minuses and genetic adaptation is a constantly working to improve the pluses. Cats are very near purrrrrfect and let’s face it, dogs have a long way to go.
Posted by Dave Wolland at 3:07 PM