She Aint Nothin' But A Hound Dog 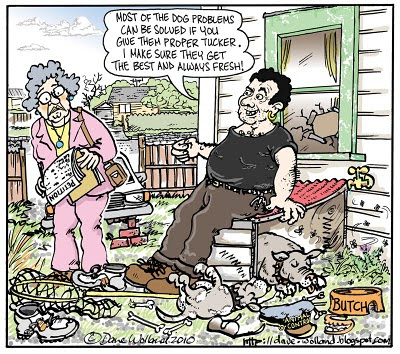 If you had suggested to me ten years ago that I would one day own a dog, I can imagine myself saying, ”You must be joking – no way!” In those days, I was convinced that dogs should only be kept by people who really needed their help - like the police, farmers, customs officers and the sight impaired etc.

We had close friends who had a Springer Spaniel and their visits reinforced my rather rigid anti-dog opinions. “Friend” would rocket out of their van and head straight for the swampy creek at the back of our place. He then would return to share his fun by splattering stinking mud over us. After they left, our garden looked like a battlefield and our house was full of dog hair and muddy footprints if we forgot to shut the door.

I often swore that, “I’ll never have one of those stinking, crapping, flea infested mongrels in my house as a pet”. Whenever my family suggested that they would like a puppy I would show them newspapers with stories of dogs attacking children and adults. Armed with this sort of horrific evidence, I would then rattle on with something like, “There, you can see for yourselves what can happen. They eat almost as much as a person and some of them want to eat us as well.”

In time of course, my kids grew older and became teenagers. I was eventually out voted and ‘Cheka’ arrived as a pup from the Animal Shelter. She was supposed to be a “medium sized dog”, but I could tell from her huge paws that this was unlikely. Sure enough, her Alsatian, Lab. and Rhodesian Ridgeback genes were revealed when she grew into a rather large adult dog (tipping the scales at 45kgs).

Cheka blew away all my hardened attitudes about owning dogs and turned out to be a wonderful member of our family. Mind you, I had learnt from years of looking after guinea pigs, cats, chooks and mice that were abandoned into my care. This time around, I insisted that the rest of my family should take of all Cheka’s needs and they did – albeit somewhat reluctantly at times.

It is worth remembering though, that all dogs are descended from wolves and they must at all times be treated with caution. The “Call of the wild” is still strong and most of them have not yet lost their predatory instincts. Our dog left our chooks and cats alone, but showed no restraint when visiting other households.

I discussed this with a female friend of mine once and her response was, “Yeah right! You can say much the same about all men being hunters and likewise they can be just as dangerous I can tell you!” She gave me a meaningful look and continued, “If I had my way I’d have all you guys tagged and registered so we could know who you belong to… aaand throw any untagged strays into the pound.
Posted by Dave Wolland at 7:30 PM