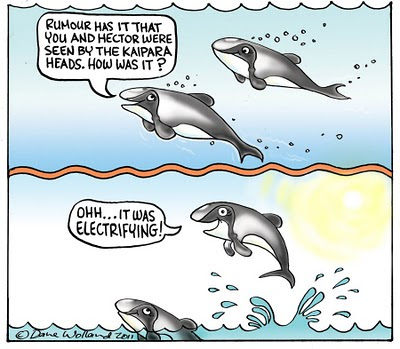 After years of speculation and hearings, it seems that the Kaipara Harbour will soon be the site of New Zealand’s first tidal power station. I am sure a lot of people have mixed feelings about this. We all need electric power to run our houses and businesses, but we also need a healthy environment to maintain an enjoyable and sustainable way of life.

Most of us probably take reliable supplies of electricity for granted and it would be very hard to live without it. As we all know, every day there appears to be a new “must have” appliance that is bound to increase our power bills.

Northland’s power supply comes from far away in other regions. This will change radically if Crest Energy fulfils its expectations to use its tidal turbines on the Kaipara Harbour. They expect to produce enough power to supply all current electrical demand from Albany to Cape Reinga.

Ruawai and Dargaville will be the closest towns to the turbines and this must surely offer them unique opportunities to access cheaper power. This is because a lot of power is lost transmitting it away from the generators and so power hungry businesses are bound to be waiting to invest there if the price is right.

In my opinion, one of those enterprises would be fish farming. A while back, I heard an interesting BBC documentary about salmon farming in the fiords of Chile and I could see how easy it would be for the Kaipara Harbour to attract that sort of investment. Various people were interviewed and the least happy were the native Indian people whose ancestors have been living there for thousands of years.

They were slowly being forced to move out because of the pollution that has upset the purity of the water. As a consequence, the wild fish stocks and shellfish beds declined and can no longer support the local tribes with food. Another problem was the use of thousands of electric lights to boost the growth of salmon. These further upset the natural balance, along with the diesel generator fumes and spillage from servicing craft.

The Kaipara Harbour too has been under a lot of environmental pressure ever since man first arrived here. What we see today is very different from pre-human times. Even though there are some positive changes in land use that are slowing the decline of water quality, there is still a long way to go. Perhaps the proposed Crest Energy Kaipara Trust Fund could put some money in that direction now that their project has the green light.

The Crest Energy website assures us that their turbines will not have a negative affect on fish in the Kaipara Harbour. However, I imagine the photo on the homepage will do little to calm their opponents. Some might see it as a large group of birds waiting on the shoreline for the tidal turbines to provide their daily feed of “fish in chips”.
Posted by Dave Wolland at 10:09 PM