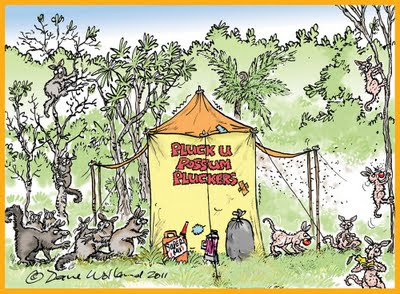 The displays of huge tractors and equipment at Field Days are certainly very impressive, but often it is the more interesting looking smaller sites that get the most attention. A really good example was the "Possum Plucker" being demonstrated outside the Department Of Conservation tent at the Northland Field Days this year. This ingenious contraption can be backpacked into the bush to remove fur from possums caught in bait stations and traps.

Possum fur prices are looking good. Inventions like the possum plucker will definitely come in handy as hundreds of possum plucking hunters head off into the bush to cash in on the high prices being paid by exporters and New Zealand textile manufacturers. In a recent TV1 news item, one plucky trapper was reported to have collected $12,000 worth of fur in seven days. That sort of return is creating a lot of interest and now DOC is being pressured to open up more publicly owned land for trappers.

The resurgence of interest in Possum fur is due to not only to its attractive appearance and insulation qualities. It also combines well with merino wool and so "possino" garments are becoming very popular at the top end of the fashion industry. In the past, possum fur prices suffered from animal rights campaigns, but countries like China have fewer concerns over those issues and this is driving possum skin prices up as well.

The New Zealand Fur Council estimates that around two million possums are being harvested each year commercially and returns from possum based products earns New Zealand approximately one hundred million dollars a year. Textiles New Zealand CEO, Elizabeth Tennet, has been making the claim that if Government and local bodies provided more incentives and encouragement, the industry returns from possum products would quickly double.

The TV1 report also had a DOC spokesman explaining how his department was in a bit of a dilemma. Possums are destroying native vegetation and wildlife and so eradication has been DOC's primary objective. Sadly, that goal has been not possible so far because they do not have the funds, manpower or technology to do it. As a stopgap measure, the controversial 1080 poison is being used to lower possum numbers to less destructive levels.

Hunters are arguing that trapping would do much the same thing for free and yield a financial pay back for the country. Tax payments from trapping, trading and manufacturing would then be available for possum proof sanctuaries that are saving native species threatened with extinction. Needless to say, DOC spokespeople are not very comfortable about his proposal. They argue that National Parks and reserves were not created to become possum farms.

However, because eradication has proven to be "Mission Impossumble", our Government is facing a lot of pressure to open up more land in areas with high unemployment. If hunters get their way, then of course less 1080 would be used and so possums would be safer to eat. You never know, possum pie could well be in our supermarkets soon - and not just a mysterious dish rustled up by Grandma Moses in The Beverly Hillbillies.
Posted by Dave Wolland at 1:42 AM