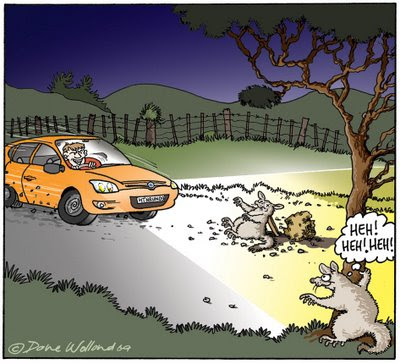 I would like to think that most people see me as a kind and considerate type of guy. However, my family says that this is just a front to mask the bloodthirsty killer that lurks within.

They are appalled at the personality change that takes place when I deal with possums. I have trapped them at night, shaken them out of trees (for the dog to dispose of) and swerved to imprint them with the tyres of my car.

It has been estimated that there are at least 70 million possums in New Zealand chewing their way thru’ our gardens and bush – so I have no qualms about sending another Aussie import to the Great Gum Tree In The Sky.

I must say that I am less inclined to use my present car for this task these days, because it is not fitted with metal bumpers. It has instead, plastic bumpers that are designed to reduce the damage on people and animals by collapsing on impact. I know to my horror just how expensive they are to repair or replace.

When I had a lifestyle block near Levin, I had a city boy’s reluctance to kill these furry raiders who were eating every fruit I grew there. I used to ring a local man who came to our place and killed them by grabbing their tails and swinging them several times before delivering a fatal blow with a spade.

When I told another friend how it was done, he said that he would give it a go too – so he reached into the cage, grabbed the tail and swung the possum. Somehow he lost his grip and I watched the possum fly skywards (minus the fur on his tail) and land in a nearby Karaka tree. He looked down at us with amazement and then he was gone. I never felt game enough to do this sort of stuff, so I drowned my prisoners after that.

As the recession bites deeper, I wonder if laid off workers and beneficiaries will be tempted to include possums on their menu. I know they are marketed overseas as “Kiwi Bears” to move them away from being associated with Australian wildlife and there seems to be a strong demand – especially in Asia.

This could be a thriving new industry for the Kaipara District and if we need some music to be used as an advertising theme, I know of one kiwi band who could be just right – ‘Fur Patrol’. They have a new (very good) cd out with the apt title, ‘Jingle King’.

I have never tried cooked possum, but I have heard that they are very nice in a stew. This culinary delight has not appealed to me ever since a relative gave me a lift home in his car after a wedding. It was late at night and yet that did not prevent him from stopping several times to pick up dead possums along the way. I can still remember vividly the stench wafting in from the rear of the hatchback.

I guess he wanted them for the fur and dog tucker. According to him, “There’s nothing better than possum to put a healthy sheen on a dogs coat.” The possum fur is of course becoming valuable once more as a blended fibre. When it is mixed with merino wool it makes very attractive and warm clothing.

If this sort of thing appeals to you, then I can really recommend the route from Paparoa to Oakleigh as a new source of income and protein. I have never seen so many dead possums on a road and alas, also the remains of harrier hawks scattered around them.