New Trap Is A Knockout 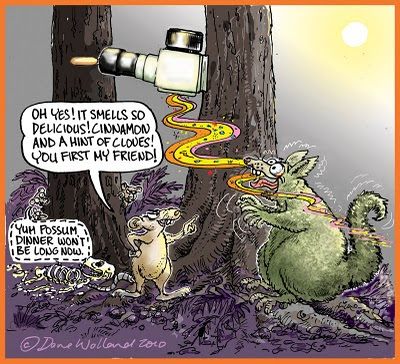 Anyone driving along New Zealand roads at night is sure to notice that we share this district with thousands of possums. They might look cute, but they ravage our orchards, gardens and the wildlife in our few remaining native forests. They also spread diseases like Tb to farms and so a lot of effort is going in to get rid of them - or at least control their numbers to tolerable levels.

The Department of Conservation has been using a poison commonly known as 1080 very effectively, but its use has provoked negative criticism from environmentalists. Research to find alternatives has been going on for some years and the Government has recently funded a $4 million trial to test some promising new traps.

These have been designed by a new Wellington company called “goodnature” and manufactured in Napier. The traps are quite different from the ones now in service and introduce some interesting innovations. They kill the target animal rapidly and can automatically reload up to twelve times. Traps currently being used have to be manually reset and therefore require more field workers to maintain pest eradication projects.

The target animal is attracted to a feeding compartment and then a compressed Co2 gas canister drives a rod that delivers an instantly lethal blow to the head. The dead animal falls away and the trap then reloads and waits for the next encounter. Like bait stations, they are attached to tree trunks and this should minimize the unintentional dispatching of cats etc.

Commercial trappers might find them useful too. I can see that it would be very feasible to locate the traps using GPS co-ordinates and then tally the kills on a hand held receiver. The current trials are focused on stoats and possums, however the very effective basic design will be adapted to other pests like weasels, ferrets, rats and rabbits.

The ‘goodnature’ company has three partners: Craig Bond, Robert Greig and Stu Barr. They met while studying industrial design at Victoria University and came together some time later with the intention to set up a company that focused on good ethical and environmental standards.

The ‘goodnatured’ trio are proud that their possum traps have achieved an A Class kill that conforms to the New Zealand National Animal Environmental Committee’s guidelines. In a phone interview with me, Robert Greig, described ‘goodnature’s approach as “holistic and environmentally friendly”. Their products aim to not only complies with a customer’s functional needs, but also must comply with goodnature’s ethical standards.

If all goes well, we will be able to see one of the first trials of ‘goodnature’ traps taking place in Trounson Kauri Park, Bushy Park (Whanganui), Te Urewera and Nelson lakes.

The future looks good for this new eco-friendly company that is determined to create a high quality design and build operation in New Zealand. For more information visit their website at http://www.goodnature.co.nz/ and see videos of the traps in action.
Posted by Dave Wolland at 1:00 AM