North! The Rush Is On! 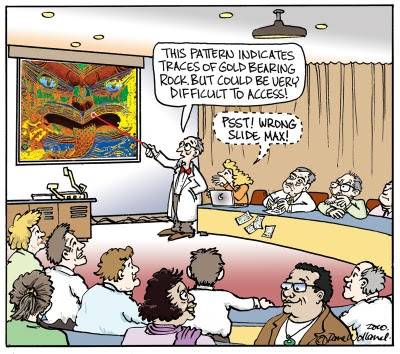 I never realized how lucky Northlanders are. According to Far North Mayor Wayne Brown, “We could be living on a goldmine!” This is news to me. I thought the region had been well surveyed in the past and all the economically viable mineral deposits had been and are being utilized.

There have been numerous government surveys done in the past and Northland’s incredibly diverse geological make up has revealed small pockets of interest but nothing substantial – apart from china clays, silica sand and limestone etc. Wayne Brown’s enthusiasm probably stems from the new, two million dollar government survey that will use the same aeromagnetic and radiometric technology which opened up Australia’s mineral boom.

Aircraft will carry aeromagnetic sensors that will help locate any underlying metal bearing rock structures, by detecting the differences in the Earth’s magnetic field. Radiometric devices will be taken as well. These will measure naturally occurring patterns of surface radiation and will be useful for exploiting geothermal resources. Both lots of data are going to be very handy for Councils, mapmakers and land users.

The Far North and Northland Regional Councils are chipping in with $100,000 and according to NRC Chairman Mark Farnsworth, “The results will be made public.” Which sounds good to a me, because I have found some geological information in the past has been locked away and only accessible to those able to pay huge fees.

Mark Farnsworth has also stated that they will, “ensure areas of environmental importance will be protected,” which should reassure many Greenies I know. There is a large amount of land in Northland’s Conservation Estate being surveyed and concern has been expressed that it will be devalued in the future with open cast mines etc.

I expect that there will some folk in Northland who will see an even wider conspiracy taking place. I can imagine them saying that the Government will be poking their sticky beaks into our privacy – just like Google did when it collected Wifi data along with their Street View pictures. After all, rocks are not the only objects that emit radiation and alter the Earth’s magnetic field.

Some of these people might have stuff and activities of interest to the men and women in blue - and of course to council inspectors as well. Others might have spiritual gatherings of mystics emitting energy fields that might be misinterpreted. This could possibly result in expensive drilling rigs searching in the wrong places and wounding Mother Earth as well as disrupting celestial harmonies.

Treaty of Waitangi claims are bound to made too, if any precious metals or hydrocarbons are found. Maori leaders like Margaret Mutu in Northland have been reported as saying, “The Land is ours, not the Crown’s…if we allow any mining, there will inevitably be conditions – and we will be paid for it.” Obviously, lawyers will be swooping in like mynas to a fig tree, if there really is any gold in “them thar hills.”
Posted by Dave Wolland at 8:40 PM