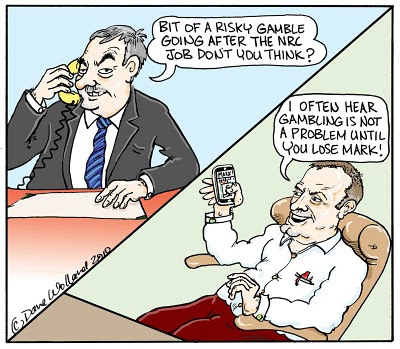 Democracy in New Zealand is in danger. The turnout for district council elections has been declining for some time now and it troubles me that so many residents are not bothering to make the effort. In 1992, 52% of eligible voters returned voting forms for regional councils and district council elections attracted 61%. In 2007 these declined to 43% and 49% respectively.

As the voting figures drop below 50%, some people are suggesting that consideration should be given to compulsory voting like they have in Australia. After all, politicians who claim a mandate for carrying out policies can hardly do so if they are being ignored by a majority of their constituents.

This sounds attractive, until you realize that people in this country value the right to choose to abstain if they wish. Compulsory voting is like demanding that everyone should drink the usual brands of milk, or be made to buy some other registered beverage. I am sure those who prefer their own rainwater would certainly oppose laws making that choice illegal.

A Saatchi and Saatchi poll points towards the source of the problem of low turnouts, by finding that 51% of local body voters are over 55. This suggests that younger people are opting out and efforts should be made to re-engage them. Generations X, Y and so on, are probably less aware of the sacrifices that were made to create and defend democracy than Baby Boomers and their parents – and appear quite happy to leave voting to older folk.

No doubt they are influenced also by the fact that they find it much harder to get into their own rate paying houses than their forebears were able to. In my opinion, any efforts to increase their interest to vote will be bound to fail until greater numbers of younger citizens are able to buy property. Land prices are absurdly high and unjustifiable when you realize that we live in one of the least populated countries in the World.

I hope that a higher turnout will take place this time in the Kaipara. There are some interesting new faces and a couple of popular and quite different personalities are engaged in a tussle for the mayoralty. The high profile Kaipara candidates for the Northland Regional Council are well known too. Graeme Ramsey (currently CEO of The Problem Gambling Foundation) is taking on the widely respected sitting NRC councilor Mark Farnsworth, who has been there since 1992.

Graeme Ramsey is well known for his two term stint as a Kaipara Mayor. I can imagine that Mark Farnsworth will not relish a challenge from his younger opponent along with Mangawhai resident Charles Cooke. Local body government is likely to change soon in Northland. The NRC will have to be in the negotiations and further opportunities will undoubtedly open up for experienced and popular politicians. Whoever gets the Kaipara seat on the NRC might have an even greater role ahead of them to guide the Kaipara Waka across some very treacherous waters.
Posted by Dave Wolland at 11:40 PM