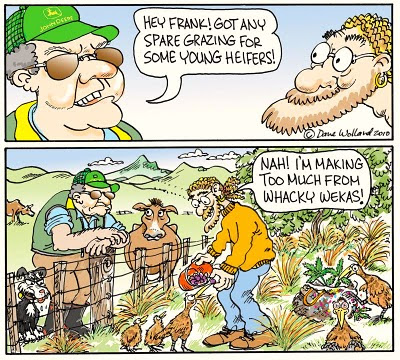 I am getting quite concerned about the state of farming in New Zealand. The rise in profitability of dairying is great news, but the short to mid-term outlook for the meat and wool side of things is dismal to say the least. The farmers and processors working there look to me like the crew of a sinking ship arguing whether they should put the bung back in or restart the engine first. In my opinion, if they do not act quickly to copy the dairy farmers example of uniting and creating something like Fonterra - then alas, they risk becoming merely a tourist attraction.

In the Kaipara, a lot of land is not really suitable for cows and perhaps it is time for farmers to take a fresh look at their properties and consider other new land uses as well. Our maritime climate is very similar to countries in South America, Asia and some countries bordering the Mediterranean Sea. Obviously, there are opportunities to successfully grow subtropicals, grapes, olives, figs, pine nuts, persimmons and the huge range of pip and stone fruit that already do so well in our gardens.

Not quite so obvious, are the opportunities to farm the native plants and animals that survived the land clearance by the European settlers. Just in the nick of time, we managed to preserve some of these in reserves and they are proving to be of real interest to biochemists developing new drugs etc. This winter, some plump native pigeons have been in my garden and the thought has crossed my mind that they would make good eating too.

We are of course generally not allowed to do so. However, it does seem a bit odd that other native species, like paua and mussels are being farmed, so why not terrestrial animals as well? One farming couple are not taking no for an answer and they are pioneering the raising of wekas for meat at Tai Tapu in the South Island.

Roger and Nicky Beattie once lived on the Chatham Islands and when they returned to the mainland to farm Pitt Island sheep (and process dried kelp), they also got approval to repatriate some wekas. These wekas were the descendants of birds sent to the Chathams in 1905 from the South Island and they have thrived enough to be hunted legally. In the South Island, this species died out and the Department of Conservation is now trying to re-establish them in reserves.

The Beatties hope to get a law change to allow them to eventually get their cheeky wekas onto our dinner plates. They claim that they make good eating – something between lamb and chicken and are best stewed (Chatham Islanders pickle them as well). They can be raised in rough bush country and seem happy in amongst other livestock. Who knows, if the Beatties project takes off, the familiar sound of “Get in behind, ya mongrel!” will one day be replaced with,“Weka weka woo - weka, weka woooo!”
Posted by Dave Wolland at 8:59 PM

Well Dave Whacky Wekas that or crazy international corporations wanting over 2 million hectares of our farmland for so called 'carbon forests' This entire ETS thing is nuts.
Great work on the cartoons as always