ETS In The Bag 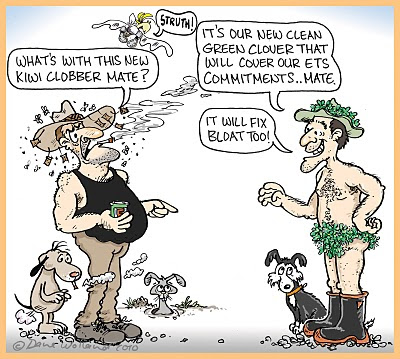 Ever since the “Fart Tax” fiasco, New Zealand politicians have been very cautious about how they will get farmers to comply with international treaty obligations to preserve the environment. The rural sector has always resisted being singled out as a cash cow to fix widespread environmental problems - especially when there is so much disagreement over the factual data that is supposed to justify government action.

In 2008, the Labour led Coalition Government ratified the United Nations inspired Kyoto Protocol. New Zealand became one of the ‘first cabs off the rank’ to implement its proposals to slow down man made climate change. National has modified those commitments in the ‘Emissions Trading Scheme (ETS), but it has soldiered on - with the Hon. Nick Smith, the Minister of Climate Change, leading the charge.

He seems to think that the Nat version is the next best thing since sliced bread. However, many farming leaders do not share his enthusiasm for the ETS. Federated Farmers president, Don Nicholson is quoted as commenting, “Dairy Farmers will need increase intensification just to stand still.”

In spite of the inevitable rural resistance, the Minister remains confident that the ETS is fair. “It is no different to the cost of any other business or consumer is facing, it is part of New Zealand picking up its responsibilities.” Industrial processors and transport operators will need to comply in 2010 and the farming sector in 2015.

In case you do not know what the ETS is, here is a quote from the Ministry Of Agriculture, “The principle behind the ETS is that emitters of greenhouse gases must either reduce their emissions or purchase New Zealand Units (NZUs) to pay for those emissions. NZUs can also be earned through forestry plantings as they sequester carbon.”

How this done is more complex. In a nut shell, it is a carbon trading scheme where those who produce greenhouse gases (CO2 and Methane etc) pay extra for that right or trade those new costs away to those who can absorb emissions. Forestry owners will benefit because their trees absorb green house gases and they can sell their “carbon credits” to those who produce the gases.

Greenhouse gas producers can also plant their own trees of course, or find other ways to offset their emissions. Grasslanz Research is doing its best to help. A promising discovery is a latent gene in clover that might be able to be switched on to produce condensed tannins, which have more protein and less gaseous side effects.

Most New Zealand politicians and scientists are probably happy to have the “ETS in the bag” of measures to save our planet. Across ‘the ditch’, the Aussies are more skeptical and playing a wait and see game. Julia Gillard has a lot more crocs in her billabong to deal with before she can pull an Aussie version of the ETS out her tucker bag. No doubt they will move faster if New Zealand’s approach will give our products a market advantage.
Posted by Dave Wolland at 8:54 PM