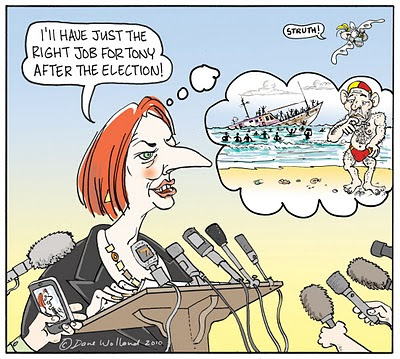 I should have seen it coming. Over the last few months, friends in Australia have been sending me anti Rudd emails that were getting more and more obnoxious. So much so, that I have been trashing them daily. It was sad to see Kevin Rudd being ridiculed and then humbled after winning an election and riding high in the polls. The words are so true in the song ‘A Rhinestone Cowboy’ - “Where hustle is the name of the game … nice guys get washed away like the snow and the rain.”

Julia Gillard will now be Australia’s first woman Prime Minister and judging from her media exposure over the last few years, I think she will make a good fist of the job. She appears to be intelligent, quick witted, very articulate and politically astute. She also seems to have a rare combination of compassion and a realistic approach to implementing her party’s policies.

I saw on TV that her father is British. With her flaming auburn hair and fair complexion, I wonder Julia Gillard’s backers see her as a kind of Aussie reincarnation of Boudicia. Tony Abbot (Leader of the Opposition) is marshalling his legions around the Australian Parliament and it remains to be seen if this new Warrior Queen will see them off into the outback later this year.

John Key was the first world leader off the block to congratulate Prime Minister Gillard, which demonstrated his (almost unseemly) keenness to keep close in touch with Australian leaders. He knows how important our relationship with Australia is. Even if we are not keeping up with our large neighbour economically, at least we can use our cell phones to remind them we are still here.

He also had some revealing comments to the press on the speed of the political changes in Australia. Such as, “it shows the brutal side of politics” and “You have to keep close to your caucus and obviously the people.” The fate of Kevin Rudd is obviously a sobering reminder of how polls can distort a politician’s judgment.

It appears that Kevin Rudd neglected to remember this reality of Westminster style democracy and fatally adopted a presidential style of leadership. Julia Gillard is very unlikely to make the same mistake. She learnt the hard way and she knows she will lose elections without the support from the various factions of the Australian Labour Party. Her next job is to negotiate peace with the intense opposition to the mining taxes and the Aussie version of our own Emissions Trading Scheme (ETS).

Illegal immigration is another issue and there are many Australians who miss John Howard’s firm action in that area. His latest successor, Tony Abbot, seems to promise much the same (along with Howard’s economic policies). As Julia Gillard prepares to take him on (politically) she might be singing other lyrics from ‘Rhinestone Cowboy’ in the shower. “There’s been a load of compromising on the road to my horizon, but I’m gonna be where the lights are shining on me!”
Posted by Dave Wolland at 2:07 AM