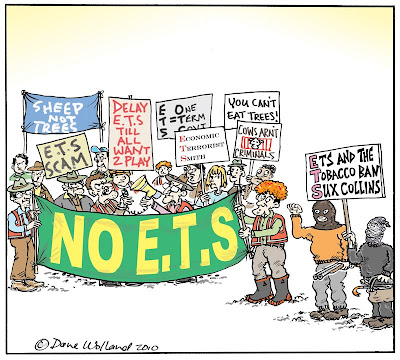 The Honorable Judith Collins is in the news once again. As the National Government’s Minister of Corrections, she has already hit the headlines with double bunking, cells in containers and re-introducing privately run prisons. Now she is making prisoners even less comfortable, by banning cigarette smoking next year.

This new policy raised howls of protest from libertarians. They were soon joined with some very experienced people who have dealt with prisoners in jail. They see the scheme as unworkable. In reply, Judith Collins has been reported to say, “We don't offer alcohol to prisoners with alcohol addictions or p to prisoners with methamphetamine addictions. This is a prison, it's not a home.”

Over two thirds of prisoners in jail are smokers. Consequently, there have been some dire predictions of riots and “bashings” for prison staff if they carry out this new reform. Perhaps it is time for Judith Collins to pause for smoko – or the more politically correct, ‘cup of tea’ and do some lateral thinking.

Tobacco smoking is not only bad for your health, it also contributes to the rise in greenhouse gases. Farmers and manufactures also produce these gases and they are being persuaded to make reductions by Nick Smith’s version of the Emissions Trading Scheme (ETS). If jails adopted the essentials of this scheme, it might take the heat of the staff and provide some entrepreneurial distractions for the inmates.

Non smokers could be given carbon credits and smokers forced to pay a carbon tax. If smokers wanted to lower their tax levels then they could get some extra cash from working in (non polluting) prison workshops and buy credits from non smokers – or grow vegetables etc and earn some credits that way.

This scheme should be of real interest the National Government. It would show us all how effective the ETS is by prison inmates responding to market forces instead of regulations. Each of them would learn the value and cost of making personal choices.

Some might argue that prison staff should be included, but that would be much more difficult because they interact freely with the rest of society. In fact, not having them on board could be very educational.

The prison inmates could be seen to be like New Zealanders who have to conform to the ETS. The prison staff would be like other countries making choices for themselves on how far they will reduce their own greenhouse gases.

Until we routinely travel across the Universe in spaceships, we will remain prisoners of the Earth. Anything we can do to stop polluting ourselves and our planet must be worth looking at. In spite of her prim and austere personality, Judith Collins deserves to be admired for her courage to make the prisons cleaner and healthier places. However, she might have to shell out a lot more money than she realizes to force thousands of addicted prisoners to put up with a daily diet of cold turkey.
Posted by Dave Wolland at 9:49 PM