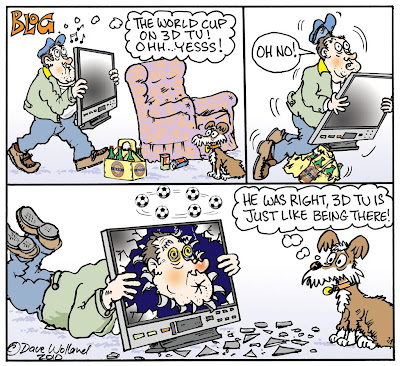 I was really blown away by the film Avatar. The fact that animators from Weta Workshops in Wellington had a hand in it, also gave me an extra buzz. I have friends who also saw it in 3D in an Auckland cinema and they said it was even more fantastic that way. So when SkyCity in Whangarei gets its own 3D setup I will make a point of seeing it again there.

I thought I might even get to see Avatar on a 3D TV as well, because I was aware that new 3D TV technology was making its debut in appliance shops this year. I can imagine that thousands youngsters, especially those into gaming, will soon be pestering their hapless parents into getting one. “Hey, Dad the footy looks choice in 3D – like being there!”

Alas, there always seems to be a fly in the ointment. The more I researched this article, the more I realized that 3D TV might be further away than I thought for most households. Some people are warning that 3D TV might be unsuitable for those who: are in bad physical condition, need sleep or have been drinking alcohol, prone to light sensitive seizures, some teenagers, the elderly or children under six.

Wow, that rules a lot of us out right away. If you escape that group, you also might find other problems too. For example, having difficulties viewing from a wide angle and also getting up for a comfort stop or making a cup of tea when you take the special 3D glasses off.

For many of us, it sounds as though regular digital 3D viewing could be tough going. Dr. Deborah Friedman, from the University of Rochester Medical Center in New York, has been reported to say, “The illusion that you see in the movies is not exactly calibrated the same way as that your eyes and brain are.”

Another American professor in ophthalmology from Chicago seems to agree and adds, “There are a lot of people walking around with very minor eye problems, for example, a minor eye imbalance, which under normal circumstances, the brain deals with naturally. In a 3D movie these people are confronted with an entirely different experience that translates into greater mental effort, making it easier to get a headache.”

This sort of information gives me the willies and I cannot see many buyers stampeding into shops and forking out large sums of money to buy these new expensive TVs (plus glasses and a Blue Ray Player). Mind you, my 15 year old Philips CRT TV has its own dangers too. It makes images with an electron gun and it is not too healthy for your eyes either.

All this appears to me to add up to one conclusion. You cannot beat getting outside for a real 3D experience by working, swimming, tramping, fishing and playing sport etc. When you come home tired, you can hit the sack for a free session of 3D dreams - after some other pleasurable bedtime pursuits of course.
Posted by Dave Wolland at 9:59 PM