Give It A Go 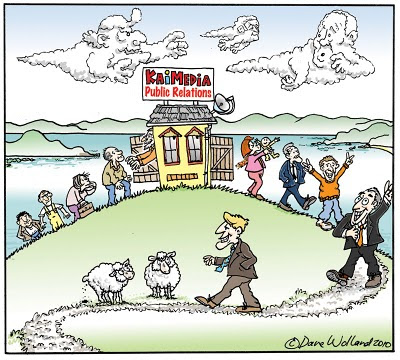 Some folk around my way like to have me on now and then with comments like, “Hey Dave, you have a lot to say and you don’t do much - ever thought of going into politics?” Indeed I have, but when I attended a District Council meeting, these thoughts evaporated instantly when I saw the huge piles of paper being lugged around by councilors. It reminded me of all the homework I struggled with at high school and this time it would be followed by a series of very public exams.

I bet many councilors have to go home at the end of the day and know that many residents will always think they do not do enough and stuff up whatever they tackle. Even so, I keep seeing the names of many serving councilors reappearing on the candidate lists and I guess they must love the job (or perhaps they are masochists who like getting paid to torture themselves).

This year we get the chance to give all of them the boot and vote in some new recruits. If you fancy the job as a councilor (or even the mayor), you have till the 20th of August to get nominated. You are bound to do well if you have the following skills: integrity, compassion, sincerity, intelligence, oratory, vision, cultural and religious tolerance etc. It will also help if you plan to assist people who grow, make and sell things and of course be someone we can trust.

As far as trust goes, you might be able to compare yourself with the Readers Digest’s list of our most and least trusted New Zealanders. In the top ten is a V.C. recipient, famous sportsmen (and women), a cook, an author, All Blacks and a film director. Mayor Tim Shadbolt is just over half way down and John Key a bit further on. At the bottom, are the likes of Tariana Turia, Roger Douglas, John Banks and Hone Harawira.

Tim Shadbolt’s mid-range scoring should encourage the free thinking mavericks out there who feel like putting Kaipara on the map - hopefully for the right reasons. Wheelers and dealers should be cautious, the business sector has been the source of bad news lately and might also account for John Key’s lower rating than expected.

The good news is, that if you happen to be an ex military officer who played representative rugby, work as a chef, write books and make films, you will be home and hosed. People with a narrow agenda, like some members of the Maori Party and die hard monetarists, have not got a dog’s chance.

For political newbies, a media coach is a must. The Internet is a powerful tool to boost your chances and yet, within minutes, it can rip your reputation to shreds. John Banks knows this and apparently pays a large hunk of his mayoral salary to a public relations expert. Now that would be an interesting job for someone who talks a lot and appears not to do much.
Posted by Dave Wolland at 10:48 PM