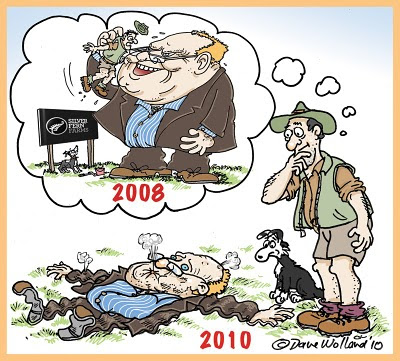 There seems to be very few comments from Craig Norgate in the media these days. Which is not very surprising of course, since his investment balloon burst in last year’s recession. An estimated one billion dollars of value apparently evaporated during his watch and severely affected the fortunes of his friends, business partners and shareholders.

The New Zealand Herald recently ran some very well researched articles on the misadventures of Craig Norgate in the market place. Columnist, Brian Gaynor, saw the cause of Norgate’s rise and fall due to making three classic mistakes. These were also made by corporate leaders in the nineteen eighties. As Brian Gaynor puts it, “they expanded far too rapidly with too much debt and not enough equity”.

The complex history of how this happened is beyond the scope of this article. However, it probably shows the danger of weak boards of directors letting charismatic leaders move companies outside prudent restraint and expose shareholders to excessive risk. Leaders with flair and imagination often need competent bean counters to keep them on the rails.

The nineteen eighties should have been a clear reminder that easy access to debt fuels the illusion of growth. Paper profits soon disappear when markets contract and the time inevitably comes to pay debts off. Even so, statements from farming leaders make it clear that Craig Norgate still has some mana in the rural sector. The fact he took huge risks is seen as entrepreneurial and farmers seem to admire people with guts who give things a go – even if the odds are stacked against you.

Even so, it has not gone un-noticed that his own personal finances appear to remain in good shape and suggests that his exposure to company collapses will be minimal. If that is the case, then like other corporate adventurers in the nineteen eighties, he will parachute safely out of the reach of liquidators.

Craig Norgate’s various roles with the Kiwi Co-operative Dairies company, Fonterra and PGG Wrightson were very lucrative and he no doubt has the means to rise again. New Zealand is losing its attraction for him and he has been making noises of moving overseas. I think is very likely that we will see the re-emergence of the Norgate Starship Enterprise “Going where no man has gone before”. No man prudent man that is, who likes to keep his money warm in his own wallet.
Posted by Dave Wolland at 11:12 PM