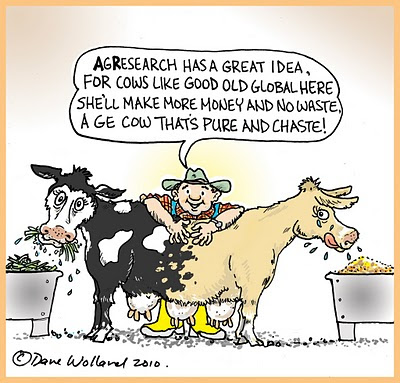 Earlier this month, AgResearch was obliged to release information about the death of young genetically modified cows. Human genes were inserted into the cow’s eggs at the time of their conception and they later suffered from the rupturing of abnormally enlarged ovaries.

AgResearch staff member, Jimmy Suttie, was reported as saying it was no “big deal” and "This was not intended to happen. But, bluntly, this is what research is all about." The opponents of genetic modification were soon up in arms about the experiments failure and voiced concern about the distress and death of the animals involved. Jon Carapiet, from GE Free NZ, not only pointed the finger at AgResearch, but also to the Environmental Risk Management Authority (ERMA) who are supposed to ensure the safety of these procedures.

ERMA has given AgResearch approval to continue its experiments with cattle, sheep and goats. However, anti genetic engineering (GE) groups have succeeded in getting a Supreme Court hearing later this year to challenge ERMA’s decisions. The recent death of GE cows will certainly not help ERMA to defend its case.

No doubt New Zealand’s reputation as a “Clean Green GE Free” country will be claimed to be at risk in the Supreme Court case. It is a very profitable marketing tool that raises the perception of New Zealand agriculture overseas. Geographic isolation has imposed heavy transport costs on all farm products. So the maintenance of this image will also probably be of some concern to hard nosed business interests who want the best returns from top shelf products.

The AgResearch experiment was trying to get cows to produce follicle stimulating hormones (FSH) to treat human infertility. Dr Elvira Dommise, an ex GE scientist, has cast doubts doubt over the need for the experiments in the first place because she says there are other better and more effective methods to treat infertility.

She also said that she thought that research should be postponed until enough was known about the mammalian genome. When questioned during an interview on TV1 about welfare issues, in a closing statement she said, “animals should not be subjected to this sort of treatment at any stage.”

The Dairy industry in New Zealand already has to cope with its negative “Dirty Dairy” image and Fonterra has been working hard to set a higher standard by pushing ahead with its Clean Streams Accord. Hopefully, market perceptions overseas will not also associate it with messy research outcomes. There will be a time when GE field trials will be asked for by researchers and the industry will have to decide if the present GE free status in dairy herds should be maintained.

Another complication will be factory farming businesses introducing the double whammy of combining GE and intensive methods in enclosed spaces. They are likely to argue that these methods are acceptable, as they will have minimal environmental impact. Commercial pressures to follow world methods and technology will always be unrelenting. For those who resist the worst of these, eternal vigilance will be the price of freedom from GE.

Click Image for a larger picture.
Posted by Dave Wolland at 2:46 AM