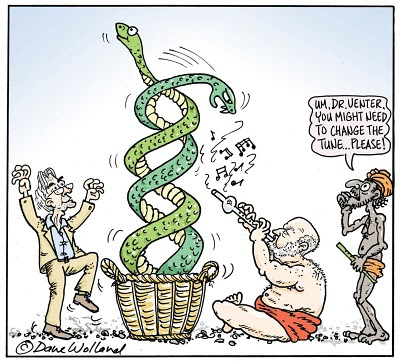 About seven years ago, it was announced that an American led team had finally worked out the basic structure of the human genome. I remember thinking at the time, “Well, that’s useful. We will now be able to begin sorting out medical problems caused by defective human genes. I might even take up the opportunity (suggested at the time), to one day finding about my own genetic makeup and ancestral origins.”

Since that announcement, I have hardly given the matter much thought. I was therefore quite surprised to see recently that the same team had created a functioning, man made DNA molecule. They inserted it into a living cell (after removing the cell’s own DNA) and successfully enabled the cell to grow, multiply and carry out the instructions given to it by the synthetic DNA.

This important scientific achievement changes the evolutionary game plan that Mother Nature has played out for millions of years. I have heard some Christian speakers explaining the mountain of evidence proving natural evolutionary changes by describing the process as, “evolution by design.” I can well imagine that many of them will be now quite disturbed to see humans getting on with the job without divine assistance in a laboratory.

Are we now able to play God? Should we stop mucking around with Nature? Dr. Craig Venter, who led the genome project and now the synthetic DNA experiments, has been reported to say that we should not be concerned about this issue or any other kind of scientific progress. He believes that most religions want to improve the life of mankind and scientific knowledge will do this. It all depends on how the discovered information is used and that is an ethical matter.

I needed to know more about this man, so I searched the Internet for more information. I came across a fascinating Youtube video, where Richard Dawkins, the famous science campaigner, interviewed Dr Craig Venter in his hi-tech laboratory (http://www.youtube.com/watch?v=3E25jgPgmzk). They chatted as they walked through some of the rooms that were full of equipment and busy staff members getting results from the many millions of dollars of government and private investment.

It was astonishing to see the amount of grunty computer power being used. One room contained computers that were the equivalent of thirty thousand PCs. What is even more amazing is that new machines coming in will cost less, take up less space and have ten thousand times the current capacity. In five years it might be possible to get a precise read out of your DNA for one thousand American dollars.

I am keeping my fingers crossed that I will be around when they can turn off the gene for aging and offer me another 300 years in a new body (minus a few imperfections of course). It remains to be seen however, if Dr. Venter’s research will be a double helix stairway to heaven, or as some religious commentators fear, a route in the opposite direction.
Posted by Dave Wolland at 1:02 AM