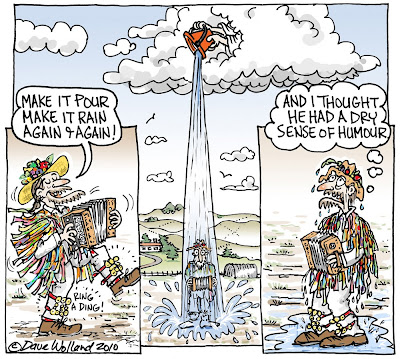 Something has to done about the weather in New Zealand. There are far too many random droughts and floods here to allow farming to be a safe and reliable way to make a living. I have heard some people say it is due to the way we pollute the air and the water. This might well be an inconvenient truth. But others, with different beliefs, tell me that such extremes are inevitable and were predicted long ago. According to them, we are also neglecting our spiritual responsibilities and so we are well on our way down the slippery slope to Armageddon.

It would surely be helpful then, if the Government took some positive steps to boost the economy and cheer us up. We need new ideas combined with inspired leadership to show us light at the end of the tunnel of pessimism and lead us out into valleys of greener pastures.

Tidal energy is a hot prospect in Northland and if the Government backed it, all that huge amount of potential electricity source could be used to power wind turbines to modify the weather. I can see them located all along the coastline blowing unwanted storms back out to sea. When drought threatens, they could be put into reverse gear, tilted 60 degrees and used to pull in moist sea air to be blown skyward. The air would then condense and create life giving rain clouds to drift inland and sprinkle their cargo gently across the countryside.

When I read this suggestion to my cat he immediately began licking his paws and washed himself behind the ears. Now that tells me I am onto a winner here – it obviously pays to think outside the square in times of hardship.
Posted by Dave Wolland at 2:13 AM