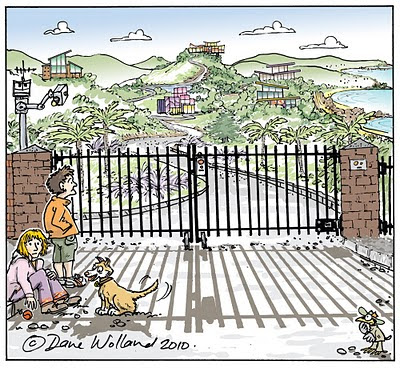 Some friends have commented lately that my freelance work commitments were making me house bound and I needed to get out more. I had to admit that they were probably right and so I drove over to Mangawhai to take in the scenery and breathe in some sea air.

I know someone who lives there and while we had lunch together on the verander, I looked around at the surrounding hills. I could see that there were even more houses since my last visit, but I guess that is not surprising because it is a very attractive place to live.

In the afternoon we drove out to the Heads for a walk along the shoreline. It had been several years since I had been on that road and on the way I saw something very unexpected. I noticed closed iron gates guarding the access route to a gated community.

For some reason I felt very uneasy about it. I had seen similar set ups in Auckland and I could see security could be a problem there. However, I could not understand why was it necessary here. It seemed to me to be a very ‘unkiwi’ way of living for a beach settlement.

At The Heads I was impressed with car park improvements and it was easy to park. The beach was much the same as I remembered it and quite a few surfers were in the sea catching a moderate surf. As we walked along the shoreline the sea came in and felt surprisingly warm as it swirled around my legs. It felt nice to feel the sea, the sun and the sand under my feet – I felt relaxed and glad to be away from urban clutter.

It was too good to last. I was soon made aware of new houses perched along the skyline and I felt as though I was in somebody’s backyard. Some of the magic went and I felt sad that yet another beautiful piece of New Zealand’s coastline had been plundered. When I learnt that these houses were connected to the gated community, my previous feelings certainly made sense.

Raewyn Peart has written a book the on the history and future development of our coasts called “Castles In The Sand”. In the interview she had this to say, “We’ve just come out of the biggest boom on the coast…it is only the beginning of what we are going to see over the next 50 years or so.”

I hope the Kaipara District Council and our Government read her book and do more to protect what we have left of our unspoiled coasts. The Americans had the scandal of “Watergate”. We might be witnessing our own “Coastgate” scandal where a privileged few can lock up what is left of our coastal heritage.
Posted by Dave Wolland at 7:36 PM