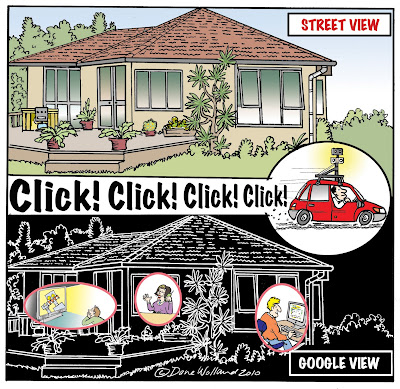 How much do you value your privacy? I think most of us need some, but I have noticed lately that quite a few people need more privacy than I do. I guess that is because I am insatiably curious about people and I believe it is only fair that others should have the same right to know about me.

I am fairly sure that I would get along well with most of the folk who run Google. They appear to be a nerdy bunch of ‘techno-zealots’ who seem to honestly believe that the more we know, the more we grow. I rather like that idea, but I am not so sure about the way they got rich selling advertising next to digital packages of information.

I was therefore not very surprised to hear that Google has been accused of blundering into private spaces recently, when it set up its “Buzz” site within Gmail to compete with Facebook. It naively assumed that Gmail users would love to have their entries available all to see. Yeah right! The predictable uproar soon had Google scrambling to patch up that gaff very quickly.

This episode certainly got people asking questions about a company that makes claims, “to do no evil,” in the way it runs its business. The latest Google breaching of privacy issue has been the way they have collected data for their Street View site.

It turns out that 3D pictures were not the only data that they collected while whizzing around our streets. They also picked up wifi signals from houses and then mapped out the location and type of devices being used. Canada’s privacy commissioner, Jennifer Stoddart, enlisted the support of similar agencies in nine other affected countries and sent a letter of protest to the managers of Google.

It has been reported that she chided the Internet giant with, “the privacy rights of the world’s citizens are being forgotten as Google rolls out new technological applications.” Google appeared at first not to see the harm being done and then again succumbed to international pressure. They have assured the world that wifi data will be destroyed.

This controversy has stimulated a privacy rights witch hunt on the Internet and now Facebook is being hauled over the coals. They have been accused of allowing personal data etc. to be made available to third parties without the permission of the account holders. Facebook has been increasing the amount of advertising to make the site profitable, but many now see this latest move as going too far. In response, Facebook is reviewing this policy and giving assurances that the problem will be fixed.

Facebook and Google are not alone in probing into our so called “private lives” in cyberspace. I agree with the comment I heard from a media expert, when he said that we should look at internet communication in the same way we write on postcards that we send in the mail. The whole world can see the message - so be careful what you write and do.

Click cartoon to see more details
Posted by Dave Wolland at 2:43 AM