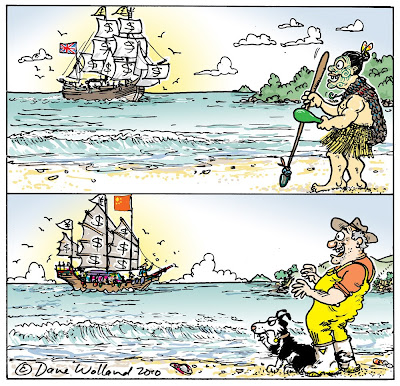 What with drought, floods and fluctuating exchanges rates, many dairy farmers in are now having to think about where Fonterra is heading again. The prospect of a rapid increase in farm ownership by foreign businesses has also crept back onto the radar and this issue will no doubt be a mixed blessing for those starting up or leaving the industry.

Fonterra is moving into stage three of its reforms, which the company hopes will get an approval vote from a majority of its 10,500 odd owners. Cynics might argue that because the company’s first effort to widen the share holding base to outside investment went down in flames - this time around, the staged approach appears to be “softly, softly catchee monkey”.

2009 was not a kind year for Fonterra, but it survived better than most New Zealand businesses with a reasonably high debt loading. However, it claims that it is prone to uncertainties in its capital base due to its redemption obligations to its owner suppliers. The first two approved stages of reforms made that obligation more flexible. In general, Stage 3 appears to propose that flexibility to be extended amongst farmers and reduce company liability.

The co-op owners of Fonterra are debating the issue at present and the company management team insists that the changes in no way mean watering down of farmer ownership – even tho’ some outside capital will be allowed in to assist co-op members trading shares with one another.

At present, the vast majority of New Zealand dairy farms and dairy processing industries are owned and operated by New Zealanders. This could rapidly change if the Overseas Investment Office approves the massive 1.5 billion dollar buying spree by Chinese investors backing a Hong Kong listed company called NZ Dairy. It has already bought farms and seeks approval to buy the 22 Crafar farms that are being administered by liquidators. Reports are coming in that agents for the company are also active in the South Island and appraising dairy farms there as well.

Some politicians, like the Greens and Winston Peters are ringing the alarm bells and warning farmers and the public of the disastrous consequences if we lose our economic sovereignty. Broadcaster and newspaper columnist, Bill Ralston, has been hired to help out NZ Dairy with the public relations side of these transactions. He has been appealing for calm and for opponents to wait until the Overseas Investment Office makes a decision.

If the application succeeds, Fonterra will soon face even more formidable competition on all fronts and competitors will even have a presence within its own co-op membership. Asia is accumulating vast capital reserves and every nation on Earth will have to work out how to manage Asian investment.

Australian governments have ring fenced strategic Australian owned media, banking, rural and mining businesses from overseas ownership. The strength of the New Zealand economy is very dependent on agriculture. Perhaps the time has come for farmers to debate if it is also necessary to keep vital New Zealand assets in the hands of New Zealanders.
Posted by Dave Wolland at 2:41 AM

It seems that the Chinese buyout started to go ahead before they had done the paperwork with the OIC - confident that there would be no problems.

I wonder whether these new owners will want to obey our environmental laws any more than the Crafars did? One of the problems with free trade agreements and increasing foreign ownership is the pressure to relax our laws in the name of not interfering with business.