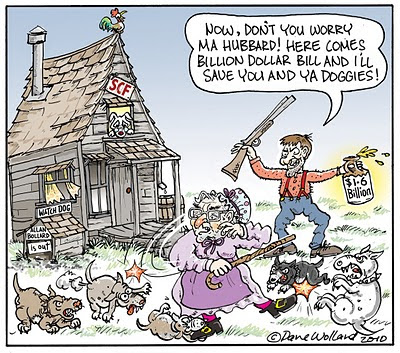 The collapse of so many finance companies in our country has revealed one of our persistent weaknesses. When it comes to handling savings, many Kiwis are slow learners. The latest head on the block is the sad face of Allan Hubbard who was once one of the richest men in New Zealand.

He established and controlled the South Canterbury Finance Company (SCF) and until recently, it was apparently well managed. In the last few years it grew very rapidly. Unfortunately, it appears that the management team took their eye off the ball and indulged in some reckless speculation. They then took a king hit from the credit crunch in the latest recession and are now in receivership.

The exact details of how this happened have yet to be revealed. SCF investors have been luckier than most because Bill English, as Minister of Finance, has become a reluctant guardian angel. He has forked out a 1.6 billion dollar guaranty of taxpayer’s money to prevent a fire sale of SCF assets. What is even more surprising is that many investors are not only going to get their money back – but with interest as well.

It is interesting to see that governments, such as the USA, Britain and NZ, who followed monetarist economic advice (deregulated markets), are now changing their minds. To fight off a depression, they are resorting to Keynesian intervention (public spending and borrowing) to avoid huge private enterprise losses. Fortunately, in New Zealand our public debt levels are low, but that is changing as large amounts of private debt are being shifted into the public sector.

I think our Government is trying to maintain confidence to prevent a crash in private equity (e.g. land and buildings) while the massive amounts of private debt are being lowered. Even so, the scale of the SCF rescue package is very large when you realize that every kiwi citizen will be risking $400 of their taxes to stabilize the market.

New Zealand governments have of course done much the same, to a greater or lesser degree, in the past. However, when the economy finally picked up, they eventually let speculating weasels wreck the hard won prosperity again by letting them run amuck in the fowl house.

Some might say that is human nature doing its thing and so why fight against the inevitable roller-coaster rides of capitalism when government intervention has its failures too. Well, all I can say is that our “Billion Dollar” Bill English is doing his best with his fiscal shotgun to keep the weasels away for now. Hopefully, his leader’s “Keysian” approach to government will inspire the economically productive chooks left to keep laying.
Posted by Dave Wolland at 1:20 AM