Save Your last Dance For Me 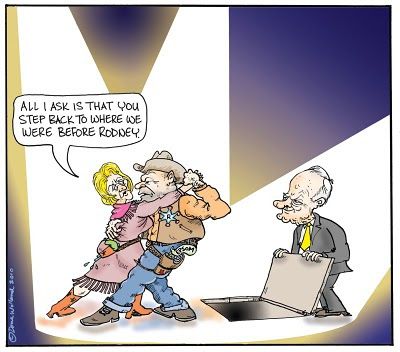 The recent Australian election has made me appreciate how fortunate we are with MMP in New Zealand. We now have less of the bitter factional fighting that goes on behind the scenes in Aussie political parties. Under MMP, factions tend to break off and recombine as new parties to make up coalitions after each election.

This gives us a clearer idea of what politicians really want to do and makes Parliament more transparent. However, the press seems to insist that we also need to know about personal relationships as well. The latest episodes are the dancing sessions in the Act Party spaghetti western “Royhide”.

Rodney Hide was made to appear as a kind of gun slinging sheriff, who had every right to terrorize the Act Party Saloon. It was probably the vote loaded Epsom Seat 45 on his hip that gave him his confidence. All his rivals could manage to carry were water pistols.

On one fateful day, the saloon doors swung open and in strode Rodney Hide’s deputy, Heather Annie-Oakley Roy, with an icy cold look in her eye. It had been whispered around the town that she had caught Rodney cheating at cards and it was time for a showdown.

“I hears you’ve bin tellin’ folks I’ve bin cheatin”, sez Rodney who was finishing his bourbon at the bar. Heather was about to reply, but in the blink of an eye, Rodney’s Epsom 45 was in his hand and with one shot Heather lay sprawling on the saloon floor.

Rodney lifted his gun and blew the smoke from the barrel. “My next deputy will have to be more careful won’t he”. He said grimly as he cast his most fierce glare at his cowering audience. Turning to the quivering Barman he barked, “Fill it again Sam!”

While Rodney had his back turned, Roger Douglas drummed up enough courage to drag Heather out onto the street and valiantly tried to resuscitate her. He then noticed the dent made by Rodney’s bullet in her deputy’s badge that had saved her life. Gazing skyward he cried out “Oh Miracle of miracles! Is this some special sign that she has been chosen to live?”

Meanwhile, back in the Act Party Saloon, Rodney’s mood had lifted. “The drinks are on me fellas! Here’s to my new deputy!”

The celebration did not last long though, because they were once again silenced when the bar doors swung open to announce the second coming of Heather Roy. All eyes fell on Rodney Hide and it was so quiet you could have heard a pin drop. To everyone’s surprise an apologetic Rodney jumped up, bowed and said how impressed he was by her resilience.

He extended his hand to Heather to dance and the man on the honky tonk piano played the Party’s anthem as they all joined in with “Rollin’, rollin’, rollin’. We’ll keep this party rolling Royhide. Through rain and windy weather we’ll always stay together. Royh-i-i-ide. Yee-Haa!”
Posted by Dave Wolland at 3:21 AM