Don't Bank On It Bill 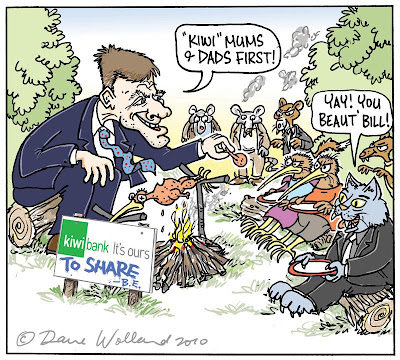 I was expecting to tackle Bill English’s mid term budget in this article and tell you how surprised I was to see low income earners get a tax cut along with the rich (I suspect a John Key influence in that PR masterstroke). No such luck, the furore over comments made by Bill English on the future of Kiwibank swamped my enthusiasm like a tidal wave.

There always seems to be a group of politicians around Parliament who despise community owned enterprises – no matter how successful they are. These days, state owned enterprises (SOEs) and co-operatives are an anathema to monetarist die-hards.

In their eyes, private ownership (foreign and local) is the only way to go to create prosperity regardless of plain evidence to the contrary - like stock market crashes and massive private enterprise credit frauds that threatened world wide social stability.

In New Zealand, SOEs and co-operatives seem to work very well in our mixed economy. I get a buzz seeing them successfully competing in the market place and assisting kiwi owned private enterprises. Kiwibank is one of them and I am now sad to see its ownership status threatened by Bill English.

It was set up to provide New Zealand owned competition for the Australian owned banks who grabbed over ninety percent of the banking market. Right from the start, Kiwibank performed brilliantly. It has almost repaid all of the Government sourced capital in dividends and most financial analysts agree that it has restrained Aussie owned bank interest rates and their administration charges.

Bill English claims that Kiwibank needs a lot more capital - but Kiwibank management and its Board Chairman, Jim Bolger, deny this. In 2009 it had 650,000 customers, assets of $10 billion, account holder loans of $7.7 billion and had an asset yield not much lower than its Aussie owned competition. In other words, it is well run and deserves its rapidly increasing customer base (passing 700,00 in 2010).

After a period of uncertainty, John Key has apparently decided against the sale of any part of Kiwibank, “as long as I’m Prime Minister”. Any plans to sell other state assets will be announced well before the next election. I wonder if Sir Keith Holyoake’s recipe for winning elections is influencing our Prime Minister?

In sharp contrast, Bill English led the National party to a record election loss in 2002. Obviously, the New Zealand electorate rejected his brand of politics and also those of his monetarist successor, Don Brash, in the following election.

I think a lot of John Key’s popularity comes from his ability to feel the shifts and mood of voter sentiment. Like Sir Keith, he knows he will need to neutralize the unpopular intentions of his colleagues if he wishes to win future elections.
Posted by Dave Wolland at 1:41 AM