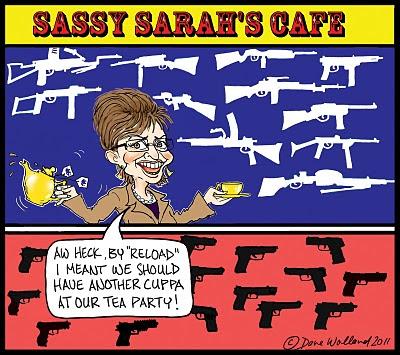 “No freeman shall ever be debarred the use of arms”. This statement, by Thomas Jefferson, is still holds true in most parts of the U.S.A. Every citizen there has the right to own a firearm and that right is protected by their constitution (with the much debated, “Second Amendment”). The recent gunning down of Congresswoman Gabrielle Giffords in Tucson and the hundreds of daily shootings across the country, makes me wonder if their version of civil peace might be more accurately described as an armed truce.

I once thought that Americans lived lives very similar to our own. After all, most of our modern cultural influences come from there. I now know this is sadly not the case after talking to a neighbour’s son who described to me his experiences while working in the States as part of his O.E.

He had a job as a contract builder in Florida knocking up kitset houses with some Kiwi mates of his. One summers evening, they decided to buy some paint guns and try them out before driving off to a paint gun game park.

They set up some beer cans as targets in the backyard of their flat and began to compete to see who was the best shot. Very soon they heard sirens and heavily armed police came storming in, demanding through a megaphone that everyone should freeze or get shot. The Kiwis thought this was a bit over the top and tried to explain that all they were up to was harmless fun.

The police were not impressed it seems with this attitude. They told them to shut up, booked them for resisting arrest and man handled them into the paddy wagon. The hapless Kiwis then spent a few days on remand and had some nasty close encounters with some of the real criminals of the area.

Fortunately, they were released without charge. The judge was content to let them off with a sermon on how to behave in America. My neighbour’s son thought that working in the States was not his thing and came home. The rough treatment he received at the hands of the police was such a shock that for months afterwards anyone in uniform gave him the shakes.

So far, New Zealand governments have resisted attempts to arm every police officer here. I regard that as a great achievement - even though some policemen have been grievously injured recently. Sadly, these incidents still happen in countries with heavily armed police because the risks go with the job. It could even be argued that police guns increase the likelihood of violence by raising the tension level.

Unarmed police on the streets tells me that we live in a country that generally believes in persuasion rather than intimidation. Long may it remain so. Let us hope we will not have any politicians like Sarah Palin putting gun sight markings on election posters this year - or pushing the politics of fear to get firearms onto the streets.
Posted by Dave Wolland at 2:21 PM