iPads Are Best - CES Who? 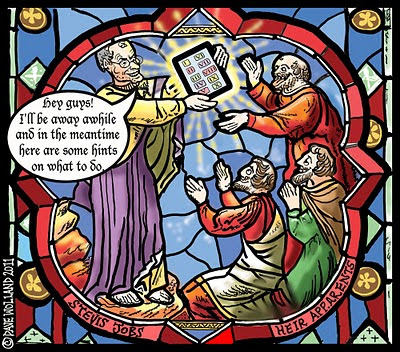 A couple of weeks ago I finally got my hands onto an iPad. The salesman demonstrated how it worked and then gave me a shot at playing a motor racing game. I gripped the iPad as though it was a steering wheel and drove onto the racing track.

The experience was so much like the real thing the salesman and a few onlookers laughed as I waved it around, crouching and wincing every time I crashed into another vehicle or a wall. I could also feel myself getting nervous. That beautifully designed iPad was as slippery as my iPod and could be easily dropped (best played on a couch perhaps).

I was very impressed with the picture quality and quick response times on the touch screen. After some practice, my fingers started to do what I wanted as I zoomed in and out, moved stuff around and typed on the keyboard. I can now see why so many commentators are saying that tablets are going to change the way we do things.

iPads were first off the block, but they are no longer alone in the tablet market. Rivals are gearing up to tackle them with products of their own. Although they might not be so sexy, tablets like Samsung’s “Galaxy” have a few nifty extras like two cameras and flash players to access some website video material.

Earlier this month, Las Vegas hosted the annual Consumer Electronic Show (CES) and sure enough the new tablet prototypes got most of the media attention. The ones to watch out for seem to be the Xoom by Motorola and the Blackberry Playbook. Hewlett-Packard is going to reveal its own tablet in February and Google and Microsoft are rumoured to be working on theirs.

The other tablets at CES were very interesting too, but what really caught my eye was a new graphics application for iPads called the Griffin Crayola Colour Studio. This is a very interesting joint project by an IT accessory company (Griffin) and an art materials company (Crayola).

There are plenty of other drawing and painting applications, however this one comes with a new interactive stylus, which mimics real crayons and paint brushes. At this stage it looks very basic and I have hopes that it will develop further to help people like myself who want to draw directly onto the tablet.

I once railed against computers in Primary Schools because I thought they might prevent children from experiencing the joyful discovery of handling real materials. I have since changed my tune. I have heard of children, with what has been described as “learning difficulties”, restore their self confidence by using computers.

The days of teachers behaving like Moses delivering the Ten Commandments from curriculum tablets to overcrowded classrooms, might well be coming to an end. In the near future, every child will probably have their own tablet. Hopefully, their own style of learning will be recognized and they will be able to march to their own drumbeat.
Posted by Dave Wolland at 6:04 PM