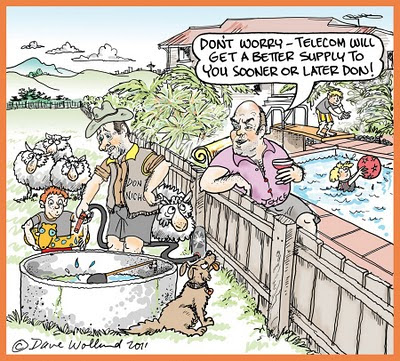 Living “out in the Wopwops” once meant putting up with rough roads, variable electric supply, party lines and weak radio/TV receptions. Today, it is quite a different story. Country people can increasingly live lifestyles not much different from their urban counterparts. Many feel they have an equal right the same services and amenities and world class broadband is often high up on their wish lists.

For quite some time now, economically advanced countries have been investing heavily in broadband. Unfortunately, New Zealand has been lagging behind as it waited for private investment from the two main providers, Telecom and Vodafone. These companies appeared to respond by keeping their prices well above the world average while they phased out their slower copper connections and older wireless transmission equipment.

It was taking far too long and so the National Government has decided to spend $1500 million to catch up with countries like Australia. Sadly, rural New Zealand will only get around $300 million heading its way and it will be given to the old duopoly – Telecom and Vodafone. Telecom will continue putting in fibre optic cable (to schools and then elsewhere) and Vodafone will extend its wireless coverage.

This has disappointed many rural commentators and farming leaders like Don Nicholson, as it appears to be nowhere near what is needed and rewards mainly Telecom and Vodafone. However Communications Minister, Steven Joyce, has insisted that the improvements will now be openly accessible to other providers and this will mean Telecom will have to change how it runs its business.

So what improvements can rural people in Northland expect? At present, in my rural area, broadband via copper wires delivers an average of 3 Megabytes per second (Mps) on a really good day and a lot less upload speed. As optic fibre connection to exchanges and houses spreads, that speed could gradually rise to a potential 100Mps – which is what most the urban areas will get within 6 to10 years. In contrast, I expect broadband rates in my area of the Kaipara to lift from 3Mps to about 5Mps download and a greater improvement in present upload speeds with a few years.

After the work is done, will we be up there in the World broadband speed stakes? According to my research, not really. Many Asian countries are already laying out 1000 Mps connections and that sort of leaves us in their dust.

Quite clearly, a lot more investment needs to be done and farmers in some areas are not waiting for Telecom and they are laying down cable of their own. I expect this will happen in Northland too as they plug into providers like the Opto Network who use the railway lines as an optic fibre route.

For most rural Northlanders though, I expect the urban/rural divide to get wider. Perhaps here is an opportunity for the Northland Regional Council to step in and oversee a greater investment in Northland’s communication infrastructure. If nothing is done, it could be business as usual as we pay more for less
Posted by Dave Wolland at 3:12 PM