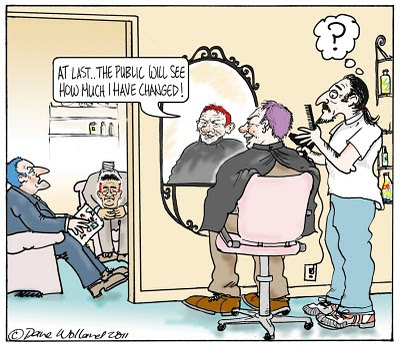 It has often been said that ‘time waits for no man’. There is not much we can do about that, but a lot of us Baby Boomers seem to be very keen to slow down the way time affects the way we look.

Every night on TV, heaps of adverts tell us which cream will banish wrinkles, the best machines to eliminate flab and even tablets that promise to rejuvenate our love life. Hair dying is big business too, although very few people I know like to advertise that they are keeping the grey hairs at bay this way.

I was therefore very surprised to hear Phil Goff admitting that he had recently started changing the colour of his hair. Was this another Goff gaff, or was he hoping that being candid would stop his receding level of support in the popularity polls?

I think most of us want our politicians to be honest and Phil certainly appears making a real effort in this direction. However, I have noticed that quite often his body language does not appear to match his words. He was after all an enthusiastic supporter of the Rogernomics experiment and I have yet to be convinced that he no longer believes in those ideas.

Phil Goff is of course not alone with this sort of problem. I wish there was a better way for us to easily identify the direction our political leaders are heading and it has occurred to me that hair dying might provide a solution.

Perhaps it is time for scientists in the fabric dying industry to do some lateral thinking and take their amazing technology to the hairdressers. I know there are fabrics and paint available that responds to a person’s body heat. Just imagine how useful it would be if they could do something similar with politician’s hair and make it respond to their thoughts.

We could insist that all politicians entering Parliament have a “Poli-Perm” to give us another visible way to check which political camp they really feel at home in. Instead of, “Ayes to the right, Nays to the left”, we could have a MMP colour wheel directing members to numerous voting stations that indicate their level of commitment to each piece of legislation (and the Party that promotes it).

Obviously, there are some politicians like Rodney Hide who have no hair at all and they could have suitable wigs made to cope with that. In fact a wig on Rodney’s head would be very appropriate. In Britain The Tories and Wigs ran the country for a very long time and I and sure he would like to do the same here.

The Maori party could however be another kete of fish. All of them might believe the prophecy, made by a Kaumatua at Waitangi, that Wellington will soon be devastated by earthquakes and a tsunami. In that case they will all be wearing hard hats and fluorescent search and rescue jackets.
Posted by Dave Wolland at 11:30 PM