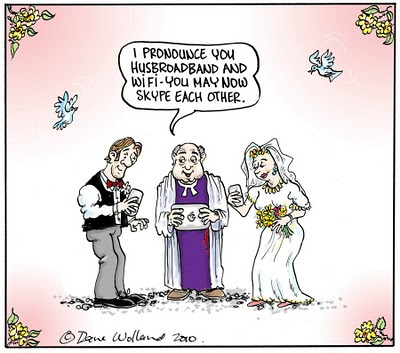 The word wi-fi has a catchy ring to it. It sounds modern in the same way hi-fi did in nineteen sixties. Wi-fi might have begun as a company slogan, but we now use it to label much of the wireless technology that is connecting people all over the globe. The days of being “wired up” with copper seem to be coming to an end.

There are however, some people who believe that we might be slowly drowning in a cesspool of electronic pollution that gives us cancer, genetic defects, nerve injuries and undesirable behaviour. They appear to the same people who say we humans have a nasty habit of wrecking our environment for economic gain. We then find ourselves being forced later on to spend huge sums cleaning up air quality, poisoned rivers and restoring the wildlife.

To be honest, I did not give this matter much thought until I began experiencing headaches while using my wireless phone. As soon as I went back to using my old phone the headaches disappeared. For that reason I have not been very enthusiastic about using wireless devices around the house.

I then had another unsettling experience when a friend called in and wanted to show me some pictures of her attending music festivals in Britain. I sat beside her and soon felt a burning sensation in my thigh. At first I thought is was due to her being very attractive and then I noticed a router hanging down from her laptop computer. I was not even touching it and so that gave me another reason to be cautious about using wireless technology.

When I checked out on the Internet if other people were having similar misgivings about wi-fi, I found plenty of scary facts, statistics and personal stories. If you took it all in as gospel, then you might not get a good night’s sleep until you lived in the country and kept all wi-fi devices out of your house. Alas, even there satellites are beaming down Sky TV signals twenty-four hours a day and the way things are going, sheep might soon be mutating into Rupert Murdoch look-alikes.

On the other side of the fence, there are just as many people who rubbish the arguments against wi-fi – after all, our hospitals are not exactly overloaded with wi-fi afflicted patients. Even the World Health Organization (WHO) has issued assurances that wi-fi is generally safe, so why worry?

Because of my own experiences, I will be playing it safe. Wi-fi radiation might not be harmful in small doses, but the affects of constant exposure have yet to be firmly established in my mind as 100% safe. In the meantime, if my daughters get pregnant I will be advising them to stay clear of wi-fi and keep their children’s exposure to the minimum. It takes time to effectively understand just how risky new technology is and I think our children are too precious to be experimental guinea pigs.
Posted by Dave Wolland at 12:31 AM