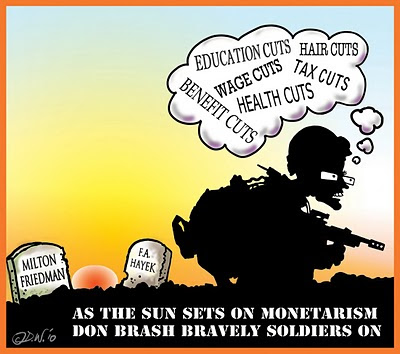 When I heard that the SAS had run a course for businessmen recently, I must admit that it had me worried. Fortunately, it turned out to be a fund raising event and only involved one company. For a while there, I had fears of Don Brash and his Round Table mates getting very cozy with army staff and tempting them to do unwise things with their weaponry.

I imagined Don Brash planning to storm the Beehive and demand that his 2025 Task Force Report be implemented forthwith and take New Zealand back to year zero (1984). To do this, they recommended slashing Government spending by $9 billion. You can bet your boots that those well heeled business leaders in the Task Force, would not include their government grant of $500,000 in those cuts.

Thankfully, John Key was not very impressed with this list. Perhaps he was thinking of the SAS incident (or even Guy Fakes Day) when he said “I am not convinced that absolutely radical big bang reform is the way to go.” He made election promises and he would be “breaking those commitments and we are not going to do so.”

No wonder John Key is so popular. He knows that implementing the 2025 Task Force policies would take this country out of recession and plunge us into a costly depression. As in past depressions, the survivors would do well, but the casualties might ravage the land with revolution and war.

Strangely enough, one of the 2025 Task Force objectives is to find ways to catch up with Australia. But when you look at what the Aussies have done to increase their prosperity, almost none of the Task Force ideas are being used.

The Australians are richer by having strong unions (that have kept many of the working conditions and higher wages we have lost), they restrict foreign investment in their banks and media (newspapers etc), have huge compulsory super funds and still have a considerable amount of manufacturing activity. The mineral boom is the icing on the cake and derived a lot of its capital from Australian owned funds.

I hope that Don Brash never agrees with Chairman Mao’s often quoted saying, “Political power grows out the barrel of a gun.” In New Zealand, we are so lucky that our army serves our needs and not theirs. In too many countries it is the other way around.

Like most government ministries, the Ministry of Defense is facing cuts in expenditure and the SAS courses are probably attempts to put some money in their social services kitty. Maybe they should be called the SOS courses to prompt the Government into providing better social conditions for those valiant soldiers who defend us.
Posted by Dave Wolland at 4:37 PM