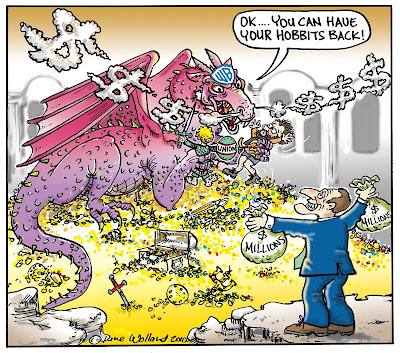 Click cartoon for a better image
I have been wanting to write about the Hobbit saga for some time now, but I thought it would be better to wait and see how it all turned out. Like most New Zealanders, I am glad that it will be produced and filmed here. We certainly need the work, although I cannot seem to shake off feelings of unease about how successful it will be.

It was very obvious to me that Sir Peter Jackson and the actor’s union were both at fault. Sir Peter appeared to be aloof and outraged at the very impertinence of actors asking for more stable terms and conditions of employment. The actors union then unwisely called in some Aussie union muscle with global connections to lean on the project. In the end, the American movie moguls called the shots and it cost us millions of dollars to put right.

There are also some personal connections to the Hobbit that make me feel relieved that the standoff has been resolved. My son-in-law is a professional stuntman and he has been waiting all year to get a job on the Hobbit set. We are now keeping our fingers crossed that he will get a contract and head down to Wellington to get his share of Smaug’s treasure. I do not need to ask him what he thinks of unions right now.

I have another indirect connection to Peter Jackson’s Wellywood operations as well. I spent a large part of my childhood in Miramar and used to play indoor soccer (with bikes) in the empty warehouses that have been taken over by Weta Workshops. They have also taken over the factories that my mother worked in and I bet she would be astonished to see what they are being used for now.

Oddly enough, the Government funded National Film Unit was only a few houses further up the road from my parent’s place. Many a time I used to sneak around the back to raid the rubbish bins for rejected film clippings. Sadly, they were very boring pictures of tourist scenes and I was disappointed not to find any cowboy or gangster clips.

I did meet some of the arty looking men working there and they showed me round. It was very different from my father’s office in the city. I remember the National Film Unit offices being full of gadgets and busy people who appeared to really enjoy their work.

For a while, I even made up movie scripts with my mate Norman who was an amazingly talented actor and artist. Local hills became volcanoes and brave battles were fought defending justice and honour from the marauding armies of evil.

When I visit the area now, it reminds me that dreams need not remain dreams. If you have the courage to materialize them, the effect of your actions will be felt right across the world. It is never easy - there will always be greed and selfishness etc to conquer every step of the way
Posted by Dave Wolland at 6:58 PM