Mining Our Own Business 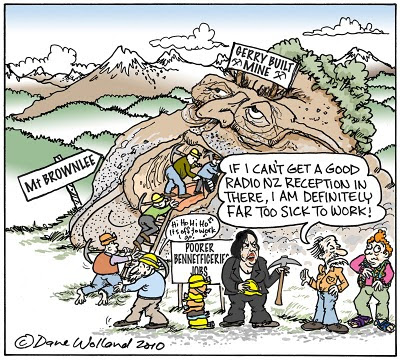 Autumn is usually a time of “mellow fruitfulness” as we enjoy the last harvests of crops and fruit. For some people however, these simple pleasures might be tainted by feelings of outrage as the National Government rolls out more of its controversial policies.

Like most governments, it seems to be following the usual three year cycle of honeymoon, mid-term policy implementation and probably finishing with election year sweeteners. They have started their mid term year by shaking up TVNZ and Radio NZ, moving into welfare reforms and now we have the Conservation Estate threatened with mining.

I must say that when I heard about the mines in parks proposal, I experienced conflicting emotions. At first I felt outraged - what right have they have to destroy our “clean and green” reputation with unsightly excavations! Then (some time later), I remembered the biblical warning of “Let he who is without sin, cast the first stone”.

I had to admit that I have spent forty years using mined materials in my pottery studio and how could I criticize the process that I feel very proud to be part of. Obviously, I was obliged to take a broader view. In my columns I have often written about the need to preserve manufacturing industries in New Zealand to rebalance our over dependence on the rural economy. Mining is an inevitable part of that policy.

In my opinion, it is the way we mine rather than where that causes so many problems. The days of flushing untreated wastes into the environment are long gone. There is now a commitment to eventually restore and protect the surroundings that is built into the mining permit costs and policed by government or local body agencies.

On the West Coast in the South Island, there are good examples of modern mines that are well behaved and prove that mining in reserves can be carried out without sacrificing conservation objectives. I heard a manager there commenting on the radio that his company’s activities were like “Key Hole Surgery and not the open heart operations that occurred in the past”.

Where I part company from this policy is when the mined material heads offshore to be processed into manufactured goods elsewhere. This provides only extractive employment and takes away investment opportunities in New Zealand. The rural sector suffers from this also and it amazes me that sheep and meat farmers cannot see the necessity to process their own products into high value consumer items in their own country.

Modern technology, such as robotics, is removing the unskilled labour content of manufacturing. If our manufacturers were given the same government encouragement that is present in other countries, we could successfully export to the world. New Zealand has not had a trade surplus high enough to become a balance of payments surplus since 1973. That is when we began to liberalize our import restrictions without insisting our trading partners did the same.

As a maker of things, I know only too well what impact this government policy has on New Zealand manufacturers and more recently on mining activities. A local farmer came to me last year with some clay samples that he thought might be of some interest. I tested them, added some additional ingredients and found the clay passed with flying colours.

I inspected the source of the clay and I was excited to see that there was a commercial quantity available. It was also very accessible. The farmer even had his own digger and truck and owned the land.

In 1973 I would have been in there, boots and all, risking my own capital to produce a Northland pottery clay. Unfortunately, in 2010 the only really viable thing to do is to perhaps truck it out as a mineral to overseas buyers. Needless to say, that is when my interest faded and the clay is still in the ground.
Posted by Dave Wolland at 7:04 PM