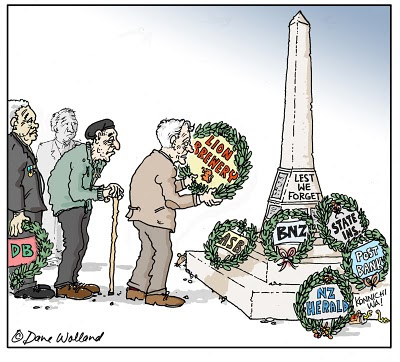 I am sure my father would blow a fuse if he knew that the company making his favourite beer, is now overseas owned. Even worse, by a country he fought against in the war. When I was younger, I remember him often telling me, with some pride, that as a shareholder in Lion Breweries he was drinking his way towards a higher dividend. Ownership mattered in his eyes. He proudly owned his own home and had shares in several New Zealand owned and operated companies.

I recall once trying to woo him away from his beloved Lion beer, when I took him a bottle of Mac’s Real Ale to try (in those days it was not owned by the Lion-Nathan Corporation). As I levered the top off, I extolled its natural virtues and watched him eye the glass impassively as I poured out the sparkling golden brew. Dad raised the glass to the window, examined the colour and then passed it under his nose a few times. He drank it, by sucking it around his mouth with a thoughtful expression and then swallowed.

I waited eagerly for his opinion, being sure he would be instantly converted. I never got it. He quickly changed the subject and got stuck into his pet political gripe of the week. I inferred that the subject was now closed as another bottle of his favourite beer appeared. The rampant lion on the label seemed to me to be roaring in victory.

Doug Meyers is reputedly, one of the richest men in New Zealand these days. I would really like to know why he felt no sense of responsibility to fellow shareholders, employees and customers when he sold his controlling interests in Lion Breweries to the Japanese. He and his colleagues in the Round Table might be toasting their rewards for throwing New Zealand unprotected into the global economy, but I have yet to see any real benefits for the average Kiwi.

I heard on the news that New Zealand has been running trade deficits since 1973. National and Labour lead governments turned a blind eye to currency manipulation by our trading partners, allowed other countries to carry out unfair trade practices and the profits from foreign investments to head overseas. Over this period we (and many other Western countries) have been paying for trade deficits by selling assets and borrowing. This has contributed to rising house prices and provided a false impression of prosperity. We are now paying the real cost of running a trade deficit economy. A ‘credit crunch’ has shaken the financial markets and a lot of vultures are coming in to roost among the chickens.

Perhaps the time has come to debate whether we want to belong to ‘New Zealand Incorporated’ or become ‘New Zealand Dismembered’ into a colony run by the top dogs of the global economy. At present, the choice is ours. However, I am convinced that the resumption of “business as usual” deficit trading after the recession will eventually remove this option.
Posted by Dave Wolland at 6:53 PM

thx u very much, i learn a lot