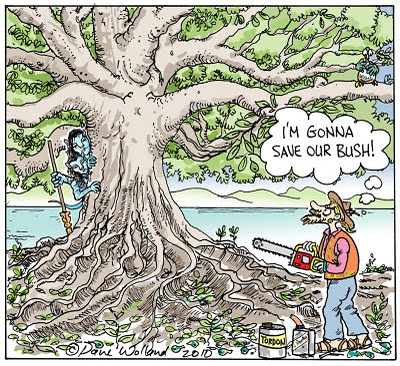 Thanks to Northland’s wonderful climate, if you have enough land you can keep your fruit bowl full of your own produce all year round. I managed to do this with my own garden and figs in particular interested me the most. I eventually tried out about ten varieties. Most of them thrived in our clay soil and within five years I was able to sell surplus figs in a nearby town.

The fig trees came from all over the place: a government research unit (DSIR), roadsides, friends and neighbours and of course the local plant shops. On a late summers day, there are few pleasures as nice as pigging out on sweet juicy figs - slightly chilled by the night air.

All of my figs did not require pollination because they grew from cuttings. There are however, many varieties in the Ficus (fig) family that need their own specific wasp to pollinate them and this explains the reason why some people never get fruit from their trees in New Zealand. It also was the reason that the famous giant Moreton Bay Fig tree at Pahi never produced seedlings either.

That has all changed, now that some tiny fig wasps have somehow made the journey here from Australia, which is the original home of Moreton Bay Fig. At first, I could see no harm in that. In fact, I naively thought that it would be quite handy for keen gardeners to go to Pahi and pick up some free seedlings for themselves.

However, Pahi resident Ralph Williams quickly changed my mind when he pointed out to me the potential environmental problem of Moreton Bay Fig seeds being transported by birds into our native bush. At Pahi, there is a Moreton Bay Fig growing as a magnificent single specimen tree, but in Australia it grows like our native Rata. Seeds germinate above the ground on other trees and eventually strangle its host to death after their roots get to the ground.

Moreton Bay Figs can also spread laterally as roots emerge from lower parts of the tree to support the weight of the spreading branches. In a bush setting it is capable of growing to over 60 meters (200ft) high and spreading out above the canopy. This is one big mother of a tree! In New Zealand, it has been reported that it has few natural enemies and even possums dislike eating it. It thrives in our warm humid climate and if left unchecked it will soon be a common sight in our bush later this century.

I have noticed that Moreton Bay Figs in parks seem to attract almost religious attention and care from the community. These giant trees remind me of the enormous Home Tree in the film Avatar that towered over a weird and wonderful forest. Perhaps we should ask some Australian Aborigines if these giant trees have any magic powers over people before we allow them to become a significant part of our landscape.
Posted by Dave Wolland at 5:17 PM