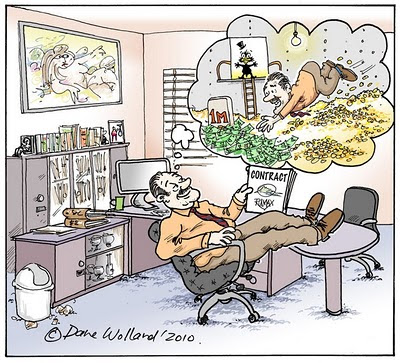 Russell had a secret. Nothing very sinister, just something personal that he wanted no one to know about. When he commissioned the design of his new spacious office in the main street, he made sure that there was a secure compartment for it near his desk. Once inside, it was safely protected by the latest high tech lock that could only be opened by recognizing his thumbprint.

Even Max, his business partner, had no idea what Russell had stashed away. They had set up their resource management company together in the nineteen nineties and financially, it had far outstripped their expectations. After they sold it recently to an Australasian corporation, Russell now looked forward to a well earned retirement in his three storied beach house at Lang Cove, when his stint as manager was finished in five years.

As a humble Council employee, way back in the nineteen eighties, he had quite a different expectation of his future. All he had was a B.A. in Geography and wonderful memories of his great O.E. in Europe, where he met his English wife Julie while hitch hiking in France.

In those days, he worked in a small, Rimu lined, council planning office that over looked the car park - where he could see his well used Holden station wagon. He remembered so many good times camping and going to the beach with Julie and the kids in that car. There was even room in the back for their over fed dog, “Piggy Muldoon”.

For a quite number of years, life was fairly cruisey for Russell. Even though they had to wait awhile to save and get the mod cons they desired. In the nineteen nineties however, the Council restructured its operations by contracting services and Russell found himself cast out into the wilderness of the unemployed. Julie pulled them through by going back into teaching and Russell went back to varsity to add a degree in Resource and Environmental Planning to his CV.

While he was there he met Max who was finishing his Business Management degree and they set up their own consulting firm called “Rumax”. The monetarist reforms and the Resource Management Act were goldmines for consultants and Rumax became a major player in the region. The business thrived and soon they had dozens of employees doing the donkeywork.

Max became a master at establishing good relationships with most of the Council CEOs and councilors. The contracts headed into the millions of dollars as they rolled over year after year. Russell could see that the Councils had a poor grasp of the planning complexities of District Plans and he made sure that outcomes were equally complex.

Recently, there had been dangerous talk in the community of amalgamating local bodies into larger districts and returning to the days of in house planners overseeing adjustments to District Plans rather than costly major overhauls handled by consultants. Russell was worried enough to have a chat to Julie about this and as usual she reassured him that they would cope.

By this time, Julie had her own company of employment management consultants and she had successfully landed some very influential contracts monitoring “The Culture and Performance” of Council staff. She smiled and warmly hinted that Russell might like to again think about the early retirement plans he had years ago.

It was time to check his secret, so Russell swiveled his plush leather chair around and opened his secure compartment with his left thumb. Inside on a coat hanger was the old, comfy cardigan, which was hand knitted by his mother. He wore it years ago when he worked at the Council and it was a pity that it was no longer possible to be part of his corporate attire. He held it up and softly spoke to his favourite cardy, “Well Mum, it’s back to square one and time to go fishing.”
Posted by Dave Wolland at 1:44 AM