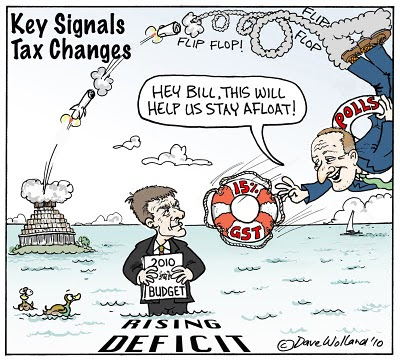 Most of us probably realize that taxation is necessary to maintain our society, but I have noticed that very few of us seem to be very willing to pay any more than we need to. Tax is such a grim little word. Perhaps we should call it something like “Social Assurance Payments”. It might ease the pain if you believe that too much of your hard earned income is being sucked into the Government’s coffers and frittered away.

The collecting of taxes in New Zealand is a lot simpler these days than it used to be. When I first started working, taxation was a key part of economic and social management. It was very complex and weighted towards providing incentives and penalties in almost every part of our economy.

A good example comes to mind when I recall taking part in a campaign to remove a punitive tax on handmade pottery. Robert Muldoon saw the hundreds of potters setting up around the country and decided we must be prosperous enough to pay our share of tax to keep his listing ship of state above water. He could see that some of us were more ‘arty’ than others and demanded more sales tax from artist potters than the makers of functional ware who had studios resembling small factories.

This really upset the more militant potters and they held (well publicized) events such as the smashing of pots on the steps of Parliament Buildings. I could not afford to do that, however I did send out protest cartoons and wrote long angry letters to MPs. I also pestered local politicians at social gatherings and annoyed them at public meetings.

I stopped making “decorative ware” such as vases and switched over to making “functional ware”. They were actually my usual vases and I simply added new names like spoon holders, pickle jars and storage cylinders etc. to avoid tax. The absurdity of it all eventually persuaded the Government to withdraw all sales taxes on handmade pottery. They realized that the cost of compliance (and non-compliance) was going to be far more than the revenue it brought in.

When the Lange led Labour Government came to power in the nineteen eighties, they did away with the labyrinth of sales taxes and set up the Goods and Services Tax (GST). It was a consumption tax that few could avoid. Various lobby groups fought hard to be excluded, but the Minister of Finance, Roger Douglas, stuck to his guns and pushed it rapidly through Parliament. He made GST cover almost everything - apart from personally owned houses.

The shift from pay as you earn (PAYE) taxes to a higher consumption tax is again on the agenda it seems. In spite of pre-election pledges not to do so, John Key appears to be signaling a likely rise in GST to 15% and compensating payments to beneficiaries in the next budget. He is well aware that GST hits poor people the hardest.

Roger Douglas is not very impressed with the Prime Minister’s suggestions. He described them as “moving the furniture around on the Titanic”. As an unashamed monetarist, he is still promoting something like a 20% flat income tax and shrinking government services to bare essentials.

I doubt if John Key will take that sort of advice. He must have seen the widespread condemnation of Don Brash’s similar monetarist solutions for the economy and knows the electorate would not wear it. Instead, he is wetting his finger and feeling which way the wind is blowing.

I would like to see him stop playing around with tax reductions. It would surely make more sense to invest in education, research and development and new business incentives. I have seen other countries, like the USA, mess around with taxes and take their eye off the ball long enough to lose the game. We do not need to join them.
Posted by Dave Wolland at 1:34 PM