The Cost Of Paying Less 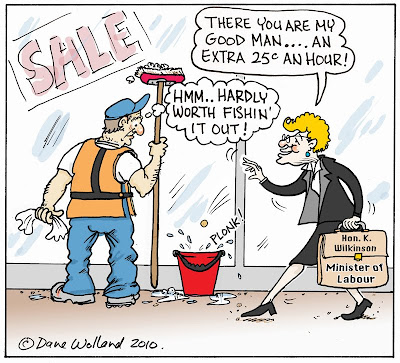 Great news for the lowest income earners! The Government has decided to raise the minimum wage by 2 per cent and it is now $12.75 per hour. This is hardly an amount to make beneficiaries and the rising numbers of unemployed race out to seek work. However, I suppose the poor should count their blessings, at least the wage benchmark has not been cut like it was in the last depression.

What I am about to suggest could possibly make the blood pressure of some Kaipara Employers rise to bursting point. In my opinion, the minimum wage is not enough to live on and so it should be raised to $15 and then $18 and $20 in the next two years. This might sound absurdly undesirable, but it might be worth your time to look at my reasons.

I had the good fortune to be in New Zealand during the nineteen sixties and I remember it as a time when wage levels and working conditions were better than most of our trading partners. Our economy had a rich diversity of businesses, a large amount of New Zealand owned investment and unemployment and debt were at very low levels.

Since that time we have moved to a monetarist economy dominated by the rural and service sectors, which are increasingly becoming foreign owned. Many politicians think this is the best way to go because at least it helps maintain employment. But sadly in doing so we have slipped down the rich list of developed nations as huge amounts of investment income leave our shores.

When I was at school we were told that we should prepare for increased leisure time and early retirement. That seems like an unbelievable fantasy these days because most kiwis now work longer and harder than ever to keep the wolf from the door.

Obviously, we need new solutions and I think I found some when I watched a Country Calendar programme on TV. A group of New Zealand kiwifruit growers were inspecting new gold kiwifruit orchards in Italy. While they were there, they had a look at the pack houses and asked their Italian hosts where the workers were. They were told that (unlike in New Zealand) the plant was largely automated. They also noticed more harvesting machines in the orchards than in New Zealand.

The Italian orchardists did not seem to be dripping in money, so the Kiwis asked why they did not use local or immigrant labour, instead of forking out for very costly equipment. This was apparently due to the EEC setting high minimum wage rates and providing some government incentives - automation had kept them in business.

Most of the countries in the EEC now have a higher standard of living than we do and I think investment in applied technology has a large part to play. We could do the same as we live in a country very similar to many of the prosperous parts of Europe.

Our low wages are not helping us catch up with Australia either. In fact, far too many Kiwis with ‘get up and go’ are doing just that and crossing the ditch to seek greener pastures. We are starting to import unskilled labour to replace them and this is changing our country.

If this is what most Kiwis want then I guess the Minister of Labour, the Hon. Kate Wilkinson, is right to keep wages low. I would prefer that we went with a different plan that is working in parts of Europe and Japan. They use higher rates of pay, government grants, subsidized training and tax incentives to push continuing technological investment to improve efficiency and productivity.

These measures alone would not create instant miracles, but along with other policies, I think they would create real opportunities to restore that sense optimism and confidence in New Zealand remember in my youth.
Posted by Dave Wolland at 12:08 AM