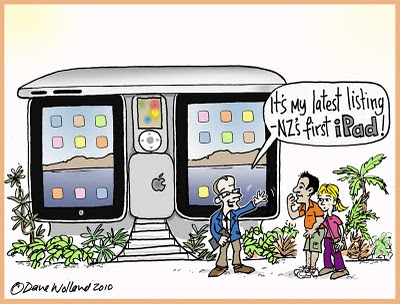 The iPad has landed! After months of intense speculation, Apple has at last revealed their latest gadget to follow their incredibly successful iPod and iPhone. Computer tablets are not a new idea. Steve Jobs (Apple CEO), along with other PC makers, have tried and failed in the past to get enough customers to buy them. So what makes this new Apple tablet so special this time?

Some critics are a wee bit disappointed that the iPad does not combine all the best features of an iPhone and a laptop. Even seasoned Apple watchers predict that the best has yet to come. Despite these reservations there are plenty of good reasons to predict that Apple is onto something revolutionary that will change the phone, media player and PC markets.

The Mk1 model is in fact a stretched out iPhone that can be used as an internet connection, media player and an e-book reader. It competes with Amazon’s Kindle, which up till now has been the major player in the marketplace. If the iPad does really well, then in my opinion, the end is nigh for many hard copy newspapers.

The iPad’s high quality touch screen certainly puts it ahead of the Kindle. Apple has left the device open to outside applications and I think this feature is where the really exciting action is going to take place. Amazon realized this and it probably pushed them into recently buying a high-tech company called Touchco. Touchco has developed an affordable pressure sensitive surface for computer displays and could give Amazon’s Kindle e-reader the features it needs to keep it in the market.

I have a few friends, on the ‘alternative side of the fence’, who cannot help stifling a yawn when I rave on about the iPad. They are convinced that this kind of gadget is a time waster. It also depletes valuable energy resources and endangers the planet. I found it hard to argue against that, until I heard an energy expert on the radio providing data that compared today’s average household energy consumption to that of the 1970s.

I was surprised to learn that, in spite of all the new gadgets in houses these days, energy consumption is very much the same. He put this down to huge increases in the energy efficiency of household appliances and improvements in insulation. House designs have improved too and often take advantage of the seasonal movements of the sun.

Mind you, modern technology in the iPad, like Wi-Fi, has its dangers. Other people can hitchhike onto your internet account if you do not install a security lock. I know someone on Dial Up who discovered a Wi-Fi hot spot in one bedroom and now enjoys broadband free of charge. I wonder if many people see this as a plus when they buy or rent a house? If they do, then perhaps the men (and women) in blue will need an iPaddy Wagon one day to cruise the suburbs and keep us from temptation.
Posted by Dave Wolland at 12:00 AM

Very interesting article, and fun to read. The information provided by you is very good,is very excellent. I got good knowledge from your summery.