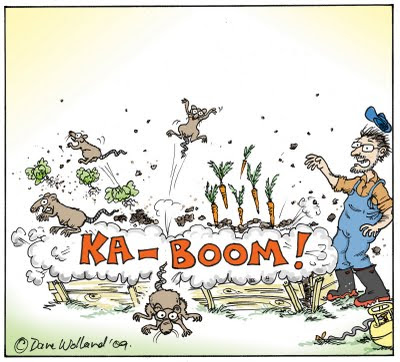 This winter seems to be wetter and colder than most –but on the upside, it is a good opportunity to reflect on the past year and share our stores and time with whanau and friends. Some of the local wildlife seem to want to share my stores as well and the most annoying thieves are rats. They usually try and get to my pumpkins before I do, but this year they had to make do with an open bag of blood and bone.

Ever since I moved into the country, I have been battling rats. In my first country garden, I inadvertently created a kind of underground ‘Ratatropolis’ when I buried our kitchen waste as compost. I was worried about rat poison killing our pets, so I decided to try another means to snuff them out.

I knew that LPG was heavier than air and so I got rid of some unwanted butane by releasing it into one of their tunnels and blocking off all the exits I could find. I then gave into my addiction to pyrotechnics and tossed a lighted match down. The effect was immediate and not a method of rat removal that I would recommend. With a deep boom, the explosion blew compost and vegetables all over the place. Rat casualties – nil!

All thru’ history, the rat seems to have got a lot of bad press with its association with plagues and famines. The mere sight of a rat these days can activate aggressive behaviour in people and I well remember another episode of this, during a family gathering after my father-in-law died.

When the service ended, we returned to the family home and as usual, the women chatted softly over cups of tea inside. I joined the men in the yard outside as they opened a keg of beer and lit up their pipes and cigarettes. The general mood was gloomy, but it soon changed when we heard a woman screaming as she opened a rubbish bag.

We all turned and saw a huge rat jump out and run across the yard. When it saw us, it paused for a moment and then made the fatal mistake of making a beeline towards the incinerator and trying to hide inside. Several men jumped into action and quickly blocked off the grate and shut the lid. Someone else went into the garage and came back with some petrol, which he generously sprinkled into the incinerator. The poor rat did not stand a chance. Within seconds it was dispatched in a raging inferno of flames and smoke.

In those days, most men wore dark suits and ties to funerals and we must have looked like some kind of ancient religious sect burning a sacrifice to drive away any evil spirits that might endanger the dead. If it worked, I hope it did the trick and took my father-in-law to place his wife was sure his troubles would no longer rattle him.

However, I am sure my Animal Rights friends would have a dim view about the fate of the rat. Perhaps it is time to take a more kindly view of this furry little animal that defies all our efforts of eradication and insists that we share a part of our harvests with them. I can think of no better way of doing this than spending a chilly winter’s night watching the DVD of Pixar’s ‘Ratatouille’. It is a masterpiece of animation and I have watched it with amazement and laughter, many times.

It tells the story of a young rat named Remy who dreams of becoming a master chef. After surviving a series of mishaps, he strives to succeed in achieving his goals and changing the status of rats forever in human eyes. If you have not seen this movie, I recommend you buy or rent it. It is really funny and visually delicious!
Posted by Dave Wolland at 2:19 AM