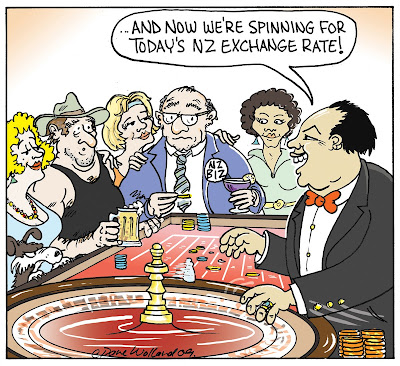 For some unknown reason, I seem to get a lot of phone calls from polling agencies. I would like to think that I have some special kind of social status in the community, but I suspect that polling is a big business in New Zealand and I am usually near to my home to pick up random phone calls.

The latest survey call was from a very polite young lady who asked me questions about the ads on TV depicting the consequences of gambling addiction. With some prompting, I did seem to remember seeing images of self abuse and feeling mystified why people get addicted to gambling.

Later on, I gave it some more thought and realized that there are all kinds of addictions and one that most Kiwis got hooked on was gambling on Monetarism (Rogernomics) as the best economic policy to get wealthier. This resulted in taking part in short term speculative gains (house and land price rises) that are now being eroded away by the current recession. For example, I have heard that the returns from milk for dairy farmers in New Zealand over the last twenty years have doubled, but the price of farms has gone up seven times.

If you want to make things or grow produce commercially in NZ, one of the biggest difficulties you have to deal with is the way our Government chooses to use a floating exchange rate to help regulate our economy. There are many economists who agree and disagree with this policy and I have not got space here to discuss their points of view. What really interests me is what is happening in the global market place and seeing if our trading policies are working well for New Zealand.

To get a take on what is happening overseas, just imagine how you would have to cope if the NZ internal economy operated like the global economy - where districts (or provinces) had their own exchange rate that was changed daily by professional gamblers in the Sky City Casino. To further complicate matters, some districts would also set their exchange rates to ensure a continual economic advantage over other districts.

If you travelled around NZ, imagine how frustrating it would be trying to work out the going rates every day so you could control your spending and income expectations in localities only a few hours from your front door. I think it would be incredibly complicated, inefficient and unfair.

Obviously, in our domestic economy, we need a single exchange rate for commerce to run efficiently along with one main language, commercial and social laws etc. Perhaps there is a solution here to help the World's economic woes by eventually having one world currency and the same commercial standards.

A logical place to start would be to get an exchange rate parity and a real free trade deal with Australia; then (in steps), negotiate the same sort of arrangement with the U.S.A., Canada, the Euro, Sterling, the Yen etc. If a shared exchange rate became established, as it does within our domestic economy, we would know at last the real costs of goods and services.

This concept might help stem the wealth transfer taking place between the West and Asia and allow wealth to be generated within each country influenced by its own natural advantages. It might also help environmentally by establishing the real cost of transport.

Initially, in New Zealand, export prices might fall. However quotas and tariffs would disappear and the economies of scale would reduce costs. Spending power would increase greatly and so input costs would decline as well.

I heard President Obama on the radio this morning saying that his government will strive to lift his country out of the recession by reforming the finance sector and promoting ‘Fair and Free Trade”. Could we do the same here? I would say “Yes We Can”.
Posted by Dave Wolland at 12:23 AM