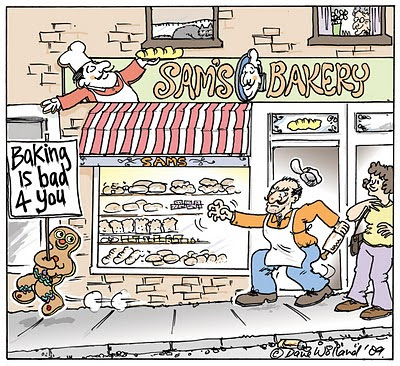 Did your parents make you eat your crusts? Mine did and often reminded me that there were millions of starving people in world that would be grateful to have such food. I suggested once that we post mine to them, but that went down like a lead balloon and my father said something like, “Come on Dai, eat them up, they’ll put hairs on your chest.”

Now that was a more compelling incentive for a young boy, but I did notice that my crust eating older sister did not have hairs sprouting out of her cleavage. For quite a few years I suspected that she secretly shaved them off like she did with the hairs on her legs.

When it came to raising my own children, I encountered the same resistance to crust eating and it did not worry me. For all I cared, the chooks could have any leftovers. My wife however, had a few sharp words to say about this, because she thought that it was wasteful and impolite to leave crusts on your plate. My attitude was coloured by reading books on nutrition that said; when children are given the opportunity, they will usually chose what is naturally good for them.

I knew that the radiated crust of a loaf was not as nutritious as the rest and so I was not surprised to learn, in a 2002 news item, that a research project on crusts (and other foods) had revealed that they had high levels of acrylamide. This is a chemical that is thought to be carcinogenic and is found in dangerously high levels in foods that are roasted, fried and baked. It can also be found in products such as coffee, some plastics and cigarette smoke.

This might well explain how cancer can strike individuals who seem to lead a healthy lifestyle. Radiation and frying changes organic molecules in a very unnatural way and most of us know that bread jammed in the toaster eventually turns to carbon, which is indigestible.

Our ancestors have of course eaten roasted and fried food for thousands of years and survived better than the raw food enthusiasts, who were probably exposed to more pathogenic bacteria and parasites. These dangers can be dealt with now by other means and in the U.S.A., the conservative FDA (Food and Drug Administration) has issued warnings about eating acrylamide rich foods such as chips, biscuits, roasts and fries etc.

The Processed Food industries quickly resisted these findings and raised a political storm that forced the FDA to do further research before coming to conclusions that would affect their revenues. That research is ongoing and its findings have received very little publicity. You can google the site and watch the progress. Results so far have indeed confirmed the presence and dangers of acylamide in our Western diet.

Does this mean in future that we will no longer smell the seductive aroma of coffee and toast in the morning if we want to stay healthy? Will visits to a bakery be a fond and distant memory like lighting up a cigar or puffing away on a favourite pipe?

Fear not, the cavalry is on its way with new research to confuse us. A study, presented in the European Journal of Cancer Research, suggests that there is an anti-cancer chemical (pronyl-lysine) in bread crusts that might reduce the high levels of colon cancer. Genetically engineered fungus is also getting into the act and its creators claim that it will block the action of acrylamides in fried and roasted foods.

So, do crusts put hairs on your chest or fears in your breast? Thank goodness we are fortunate to have a huge range of food to eat compared to our ancestors. We can increasingly make informed choices to what tastes good and improves our wellbeing, regardless of the advice in old wives tales and social conditioning.
Posted by Dave Wolland at 1:16 AM