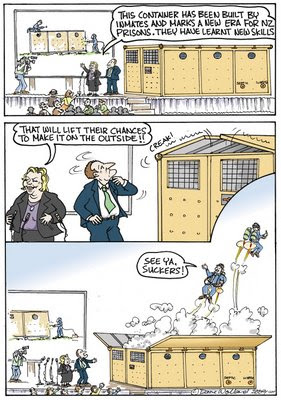 Now that the David Bain retrial is over, I guess that it is no co-incidence that the media is once again focusing on how we treat incarcerated offenders in general.

You might be, like me, somewhat ashamed to live in a country that ranks second in the world (behind the USA) for the number of prisoners per head of our population held in jails. Not surprisingly, we have been warned that we will soon run out of cells and so the Government is looking at its options as it faces a declining tax take during a recession.

It is a sad fact that it would be probably cheaper to send inmates on a world cruise on a luxury liner than building a new prison to house them. This situation crossed my mind when I saw that the Hon. Minister of Corrections, Judith Collins, was “floating the idea” of building containers to house offenders. I could see containers being filled with double bunkers and then stacked high on ships to be moved away into international waters. Once out there, low paid non-unionised Asian staff (with Khmer Rouge experience perhaps) could deal with prisoners until they were reformed enough to be gratefully returned to New Zealand.

However, the minister intends only to use containers to extend the capacity of existing prisons. Perhaps she has been reading at the same trendy architecture/design magazines that I have been looking at recently. They show, if you use some imagination, that you can indeed create very affordable and attractive pieces of accommodation out strictly function steel boxes.

The next questions I see arising will be: where are these converted containers going to come from and how much will they cost the taxpayer? I have seen figures quoted that range from $53,000 to $60,000. Now that appears incredibly high, but I suppose that it would be cheaper than building a prison that costs $643,000 per inmate.

Judith Collins initially said that there would be scope for prisoners to build their own cells (hence the above cartoon). A group trying to get poor people housed, have come out and said that this was a wonderful opportunity to kill two (jail) birds with one stone.

This scheme would give prisoners skills and a tax free asset to take with them when they leave. It would make them more employable and ease the pressure on the State Housing stock and prisons by encouraging more home detentions as a part of a prisoner’s parole.

I think we are onto some very useful lateral thinking here and I can envisage some additional uses for prison built containers, which could be built to be moved easily. If you put them on trucks they would make ideal mobile homes for seasonal workers.

Unfortunately, I doubt if Judith Collins does much lateral thinking and large numbers of inmates are very likely to be boxed up in places of ‘containment’ – to borrow an American expression from the dark days of the Vietnam War.
Posted by Dave Wolland at 2:36 AM