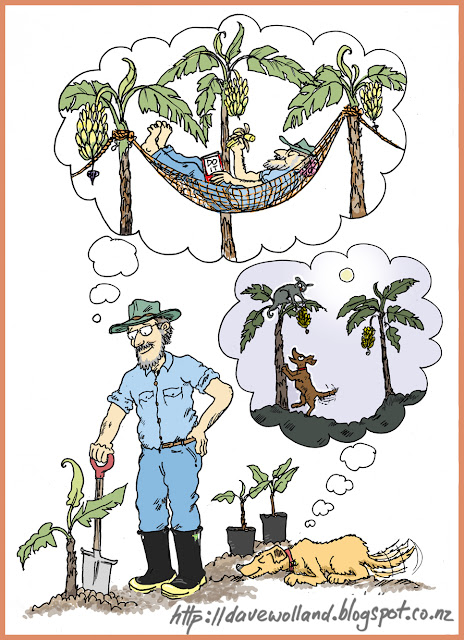 “Did you know”, she said, staring at me with rising intensity, “That bananas are the most sprayed and fumigated fruit you can buy?” I looked at the banana in my hand, which looked innocently delicious, as I peeled back the yellow skin. “What’s more”, she continued, “the average life expectancy of a worker in a plantation is around 40 years due to their massive exposure to insecticides.”
How could she do his to me! There I was, about to enjoy one of my favourite foods and now I felt my appetite fading when I thought of all the deceased plantation labourers who had sacrificed their lives to make my banana appear so perfect.
Like many kiwis, I enjoy eating bananas and if what I was being told was true, then I might be heading to an early grave after being poisoned by eating one banana too many. I hope not. I want to reach old age in good condition and so I looked around for an alternative source of supply.
Luckily, I discovered bananas do grow well locally in Northland. A couple I know, told me they had a magnificent group of bananas growing in their backyard which produced much more fruit than they could eat. They commissioned me to design and make a Christmas card for them and we decided to trade it for a bunch of home grown bananas.
The card did not take that long to do and I thought I did rather well out of the deal as lifted the huge bunch of bananas onto my shoulders and walked into our living room singing a West Indian folk tune - “Day O, day O, come mister Tallyman, tally me banana. Daylight come an’ I wanna go home.”  I proudly laid them down onto our living room table expecting applause and delighted appreciation.
I got neither. After a period of stunned silence I was told they were too spotty and nowhere as good as the ones in the shops. “And besides that Dad”, I was told emphatically, how can we tell our friends that you work for bananas – it’s so embarrassing.” Undeterred, I hung them in my studio and enjoyed several weeks of delicious fruit as they gradually ripened.
I am surprised that there are so few banana growers in Northland. Some varieties do really well here and apparently, existing growers have a waiting list for their produce. I have read that New Zealand eats more bananas per head than any other country on earth and 99% of them are imported so there is surely scope there to knock back New Zealand’s persistent balance of payments problem.
Then again, in other ways we are already on the road to become a Banana Republic as the Government experiments with new flag proposals and turning a blind eye to tax evasion. I have a better suggestion; give rabid Neo-liberal politicians some land 'Up North', supply them with sub-tropical fruit trees to plant, impose home detention and let them go bananas in their own backyard.

PS my dog patrolled the garden at night to keep it possum free.