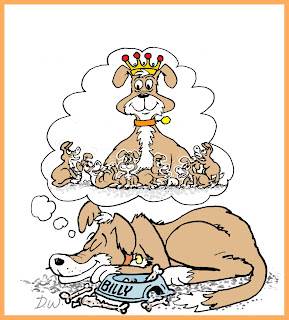 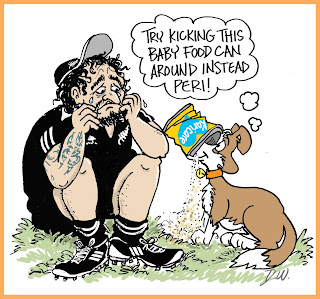 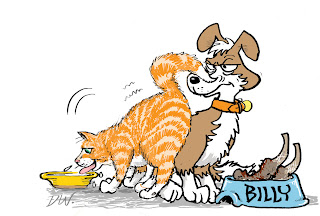 This is the start of a new venture. I am now illustrating Paul Campbell's column about Billy The Sheep Dog - a light hearted perspective on life on a NZ farm from a dog's point of view. It is appearing in the Kaipara Lifestyler and associated rural papers in  Northland, Waikato, Taranaki and Canterbury, published by North South Media, based in Dargaville.

In the first cartoon, Billy is dreaming about Kate and William's royal baby in the UK and imagining himself as a top dog with lots of royal puppies. The second cartoon has Billy giving advice to Peri Weepu after Peri missed out on All Black selection. The can in Billy's mouth is from a brand that featured in the massively overblown concern about the possibility of contamination by microbes causing botulism sourced from one of Fonterra's milk processing plants. The media kicked this issue around and badly dented Fonterra's reputation.
Click on the cartoon to enlarge
Posted by Dave Wolland at 12:36 AM

Congratulations Dave on your new venture with the KL