In Praise Of Trees 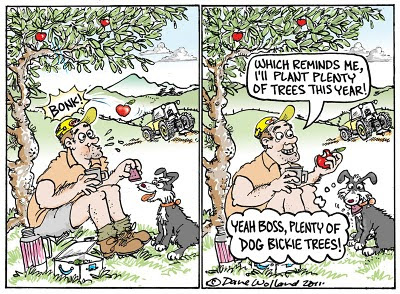 When you drive through Northland, there appears to be quite a few trees on farms. Shelterbelts often line the roads and here and there are patches of pine plantations and pockets of native bush. However, when you fly over the district (or use Google Earth) it is very obvious that there are in fact very few trees amongst the thousands of hectares of bare pasture.

In parts of France, which have a very similar climate to Northland, the landscape patterns are quite different. There appears to be many more trees in the landscape. I suspect that this is due to hundreds of years of peasant farming which broke the land titles up into small pieces and kept a lot of trees for practical reasons (food, timber and shelter).

When I was at school we were taught that New Zealand farming was much more efficient than French farms. We were told that farmer’s incomes here were higher too due to them owning larger farms, greater use of technology and modern processing methods.

At the time that was probably right. But when France helped form the EEC, their farm gate prices rose and production on these so called backward farms rapidly increased. Eventually, the EEC had to pay French farmers to produce less to better match production with consumption.

This was a bit of a mystery to me because I really believed what I was taught. I now know that some peasant farming methods actually make a lot of sense when you take a longer historical view. Food markets and politics are always changing and it obviously pays to be fairly self sufficient and not have all your eggs in one basket.

Perhaps there is a timely message here for Northland farmers who try to maximize production from one or two types of animals such as cattle and sheep. Like many areas in rural France, Northland is close to a large prosperous urban area. This offers plenty of opportunities for a diverse range of small specialized farms and mixed land use on larger farms.

Trees can fill that niche and lower the carbon footprint of livestock grazing as well. We are blessed with a climate that can successfully grow trees from both temperate and sub-tropical regions. In the farmers markets in Northland, there is of course a demand for familiar fruit such as plums and apples etc. The better prices though are gained from the more exotic fruits that grow well here such as bananas, figs, cherimoyas, dates and sapotes.

Timber for housing, furniture and shipbuilding are also needed (including natives). I was impressed with the way a farmer in Waipu persuaded his children to plant quite a few timber trees on an unproductive part of the farm. These trees now stabilize the land and provide valuable shelter. His kids put in the hard graft and their efforts are now secured in writing to enable each child to pay off student loans and capital for other ventures.
Posted by Dave Wolland at 1:52 PM